The David Weingarten Collection of 20th Century Souvenir Buildings comprises more than 3,000 three-dimensional miniatures of actual buildings and monuments that exist or have existed in the real world. Amassed over 40 years and representing buildings from over 60 countries, the 20th Century Souvenir Buildings Collection is the leading and most extensive of its kind. After decades of display in museums and private residences, the entire collection was donated to the Museum in 2019.

A selection of buildings currently on view in Animals, Collected.

Curbed SF: A Pair of Architects Create a Home for Their Grand Collection

Behind the Scenes: Packing up the 20th Century Souvenir Buildings Collection

Models featured in All Roads Lead to Rome

Architectural Models from the Collection of Piraneseum

“Though in a new and memorable setting—the National Building Museum—we imagine this collection of architectural mementos will continue its familiar work: sparking recollection of places modest and monumental, every day and extraordinary, and with this, architecture’s part in all our lives.” —David Weingarten

Weingarten first began collecting souvenir buildings in 1976, on a trip to Germany’s Speyer Cathedral with his uncle, architect Charles Moore. When his uncle purchased a larger miniature of the cathedral, Weingarten opted for a smaller representation. The two Speyer Cathedrals, part of this collection, sparked a decades-long endeavor, later assisted by Margaret Majua, with whom Weingarten wrote two books about the collection, and Lucia Howard, his partner at Ace Architects.

“The collection’s many types and groups of souvenir buildings suggest alternate (and entertaining) ways of thinking about architectural design and history. This history is popular, not pedagogic or polemic, focused not at all on the inexorable progress of the styles, but instead on those buildings people have thought remarkable and memorable, engaging and appealing, swell enough to commit to memory, provoked by a souvenir building.” —David Weingarten

These pocket-sized buildings are at once a reminder of travel and a record of popular architecture. Included in the collection are iconic tourist destinations: the Tower of Pisa; the Empire State Building; the Parthenon; the Space Needle; the Alamo; the Eiffel Tower; and the Temple of Heaven. Also included are more modest buildings, such as dozens of suburban American banks, grain silos, and football stadiums, as well as souvenirs from places with less architectural, but nonetheless popular, pedigrees: Lincoln’s log cabin, Elvis’ Graceland, the Disneyland Castle.

Souvenir buildings are almost always cast in a mold and mass produced, and they are made from a variety of materials: cork; every sort of marble; brass and bronze; zinc, iron, silver, copper, and gold; plastic, paper, wood, clay, wax, and rubber; and even soap. In addition to their purpose as a souvenir, some serve other functions: they are inkwells, lamps, and boxes; paperweights, pencils, and pencil weights; salt and pepper shakers, coin banks, bookends, and bottles; cigarette lighters, cigarette boxes, and ashtrays; needle cases, radios; erasers, and candles.

Before arriving at the Museum, objects from the 20th Century Souvenir Buildings Collection formed exhibitions in museums across the U.S., including the San Francisco Museum of Modern Art, the Art Institute of Chicago, the Octagon Museum, St. Louis University, the Museum of the City of New York, and the SFO Museum. Souvenir Buildings/Miniature Monuments, describing the collection and phenomenon of architectural miniatures, written by David Weingarten and Margaret Majua, was published by Harry Abrams. 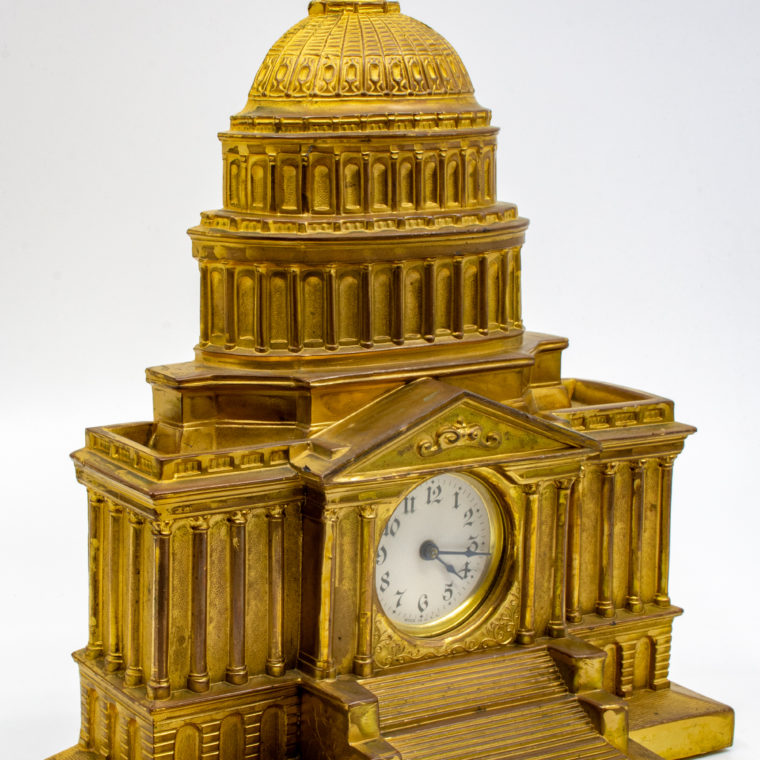 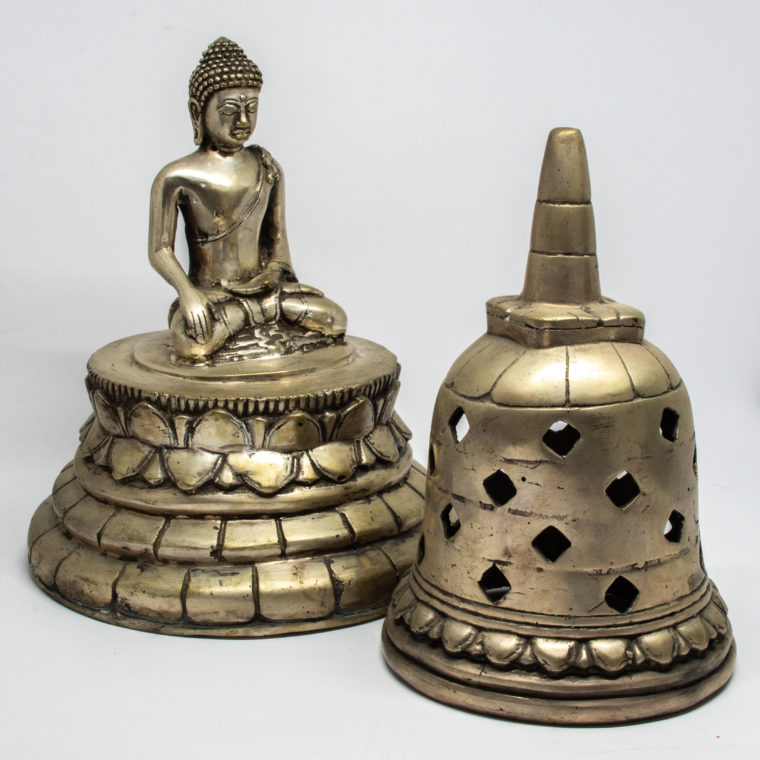 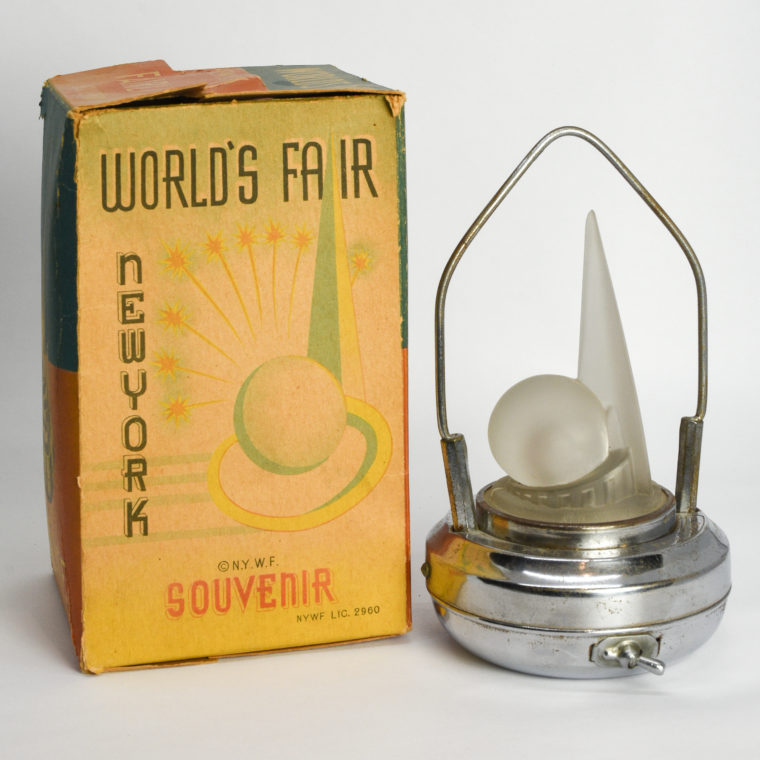 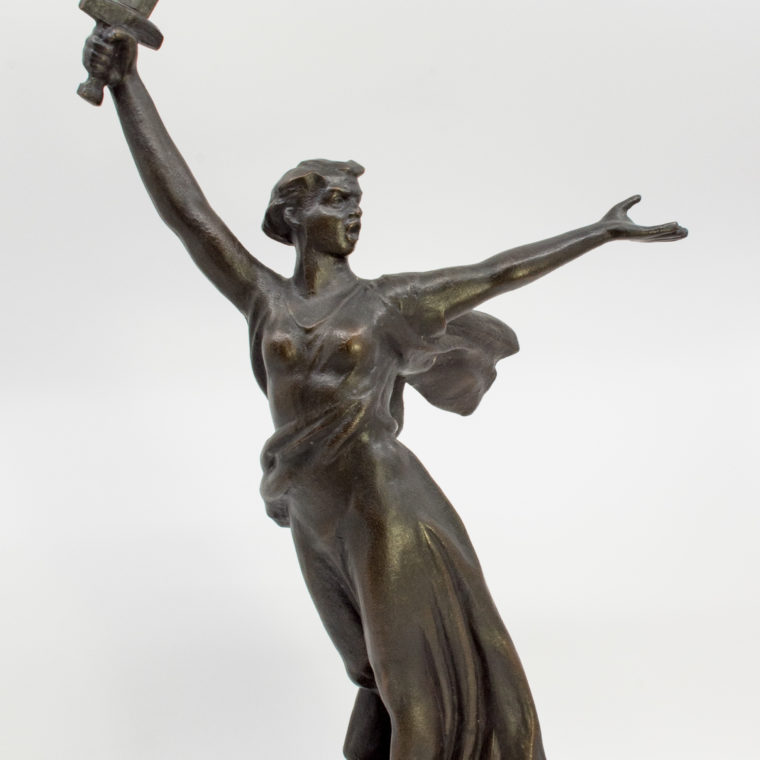 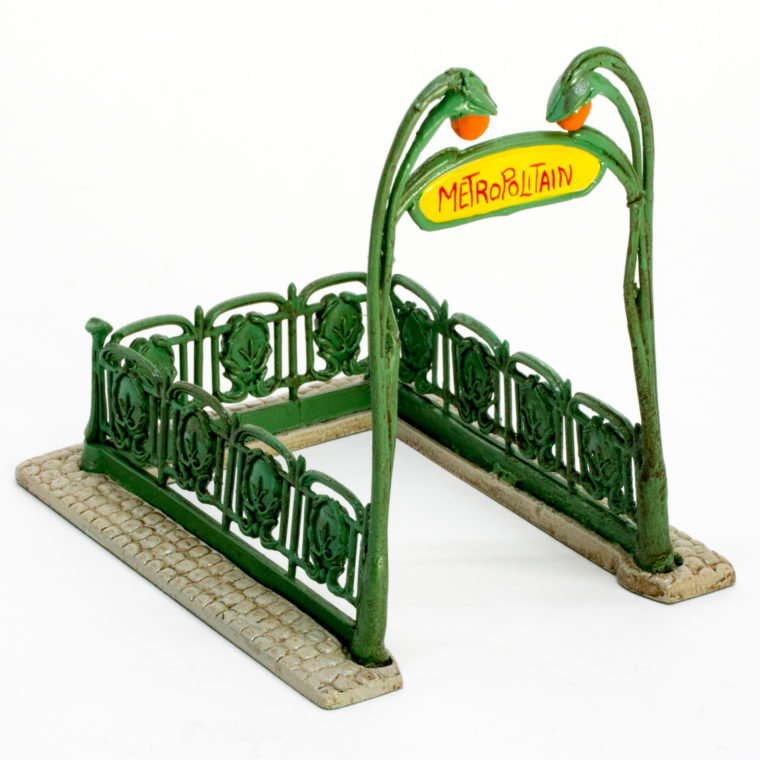 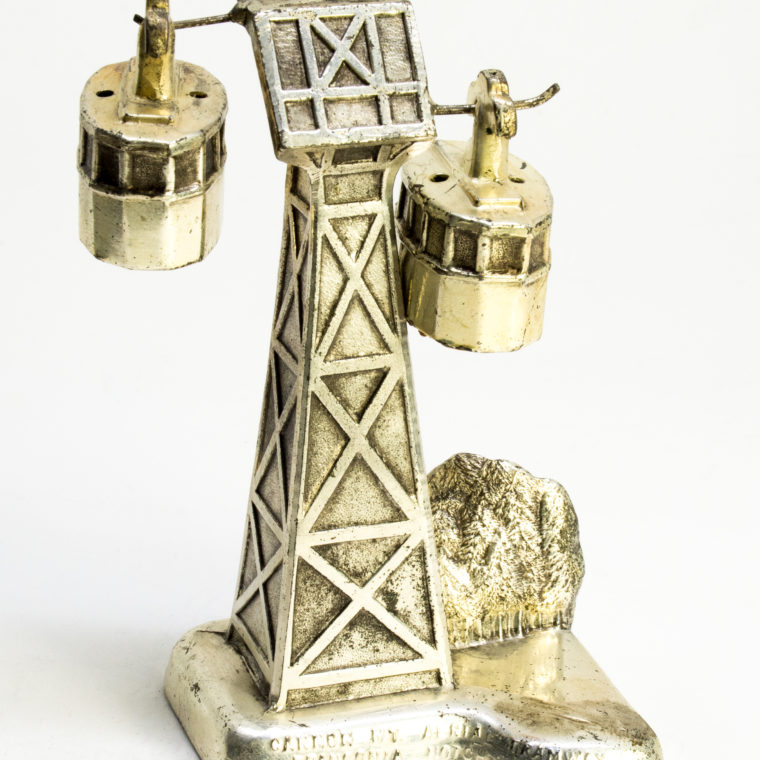 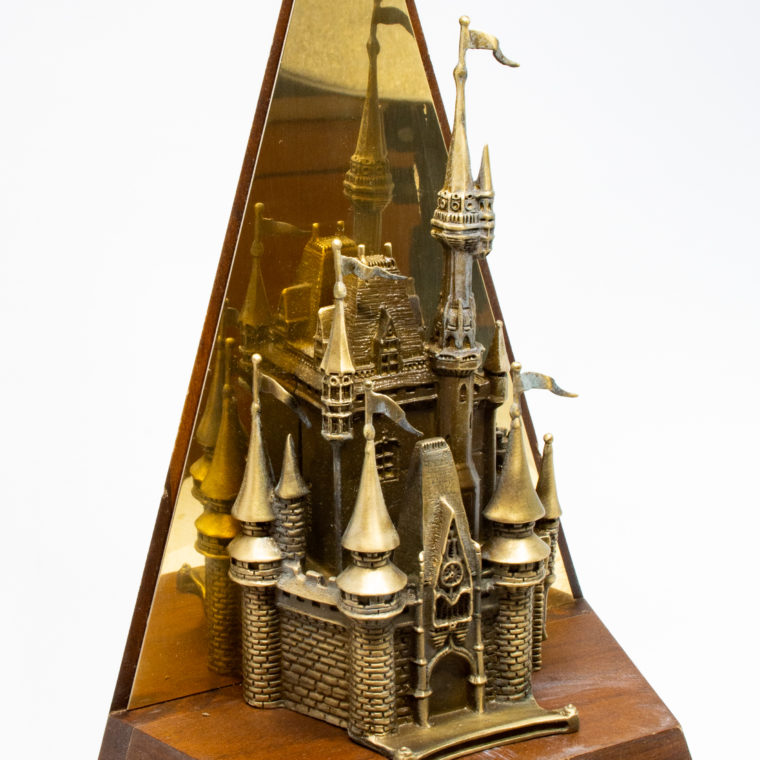 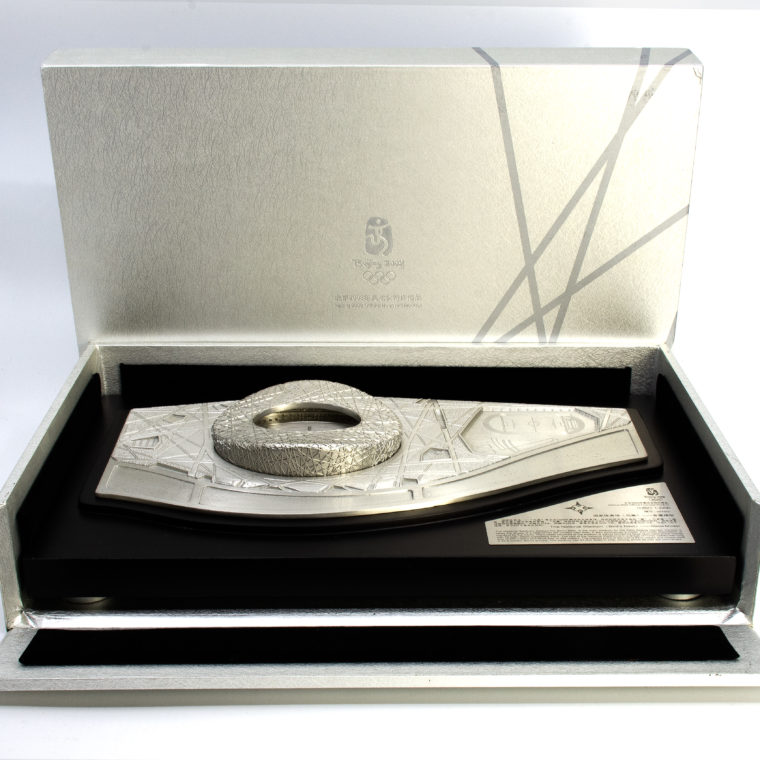 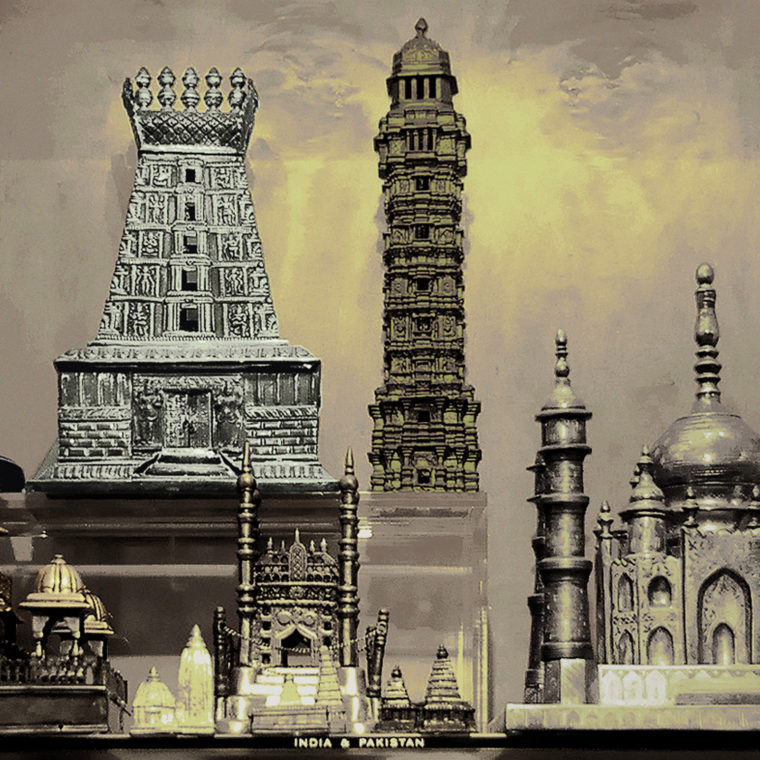 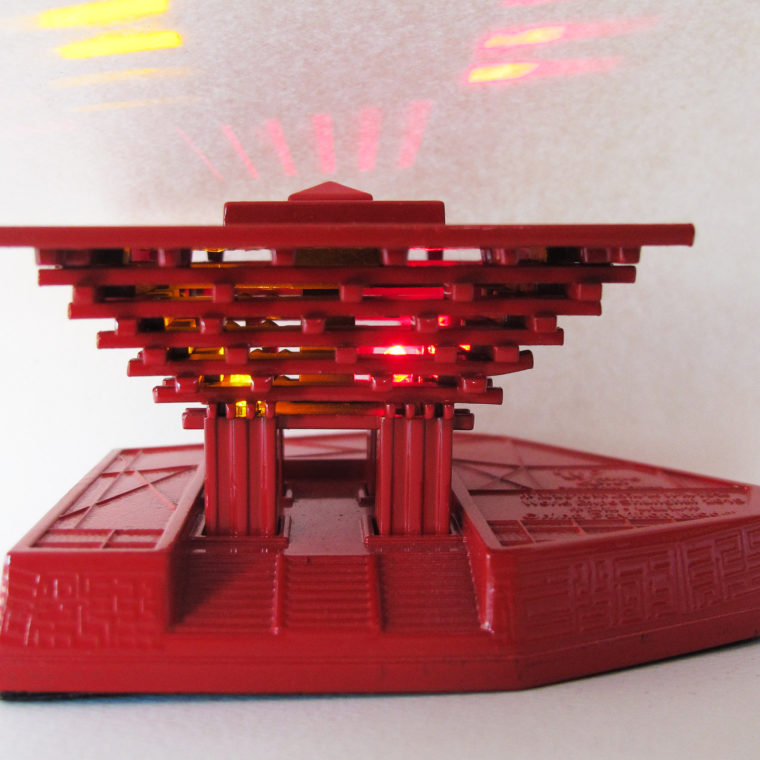 Shanghai Expo. An exception to the 20th century parameters of the collection is this carefully wrought, painted pot metal replica of the theme building from the 2010 Shanghai Exposition. Flip a concealed switch and patterns of colored lights issue skyward. 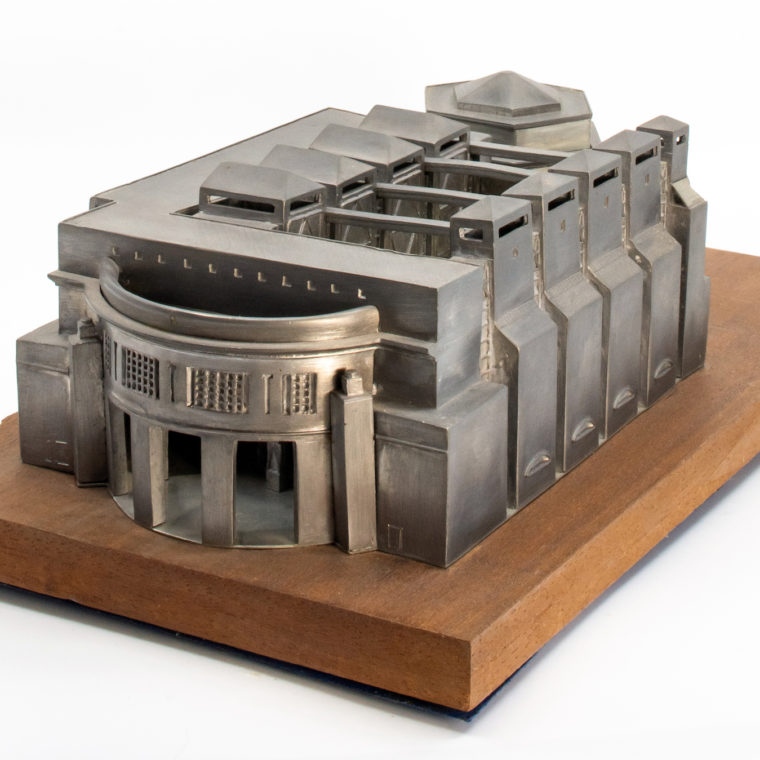 Holocaust Memorial Museum, D.C. Construction of the Museum, which opened in 1993, was privately funded. (The federal government provided the site.) Some of those providing especially substantial gifts were presented with large, cast pewter models of the Museum, identical to this example. 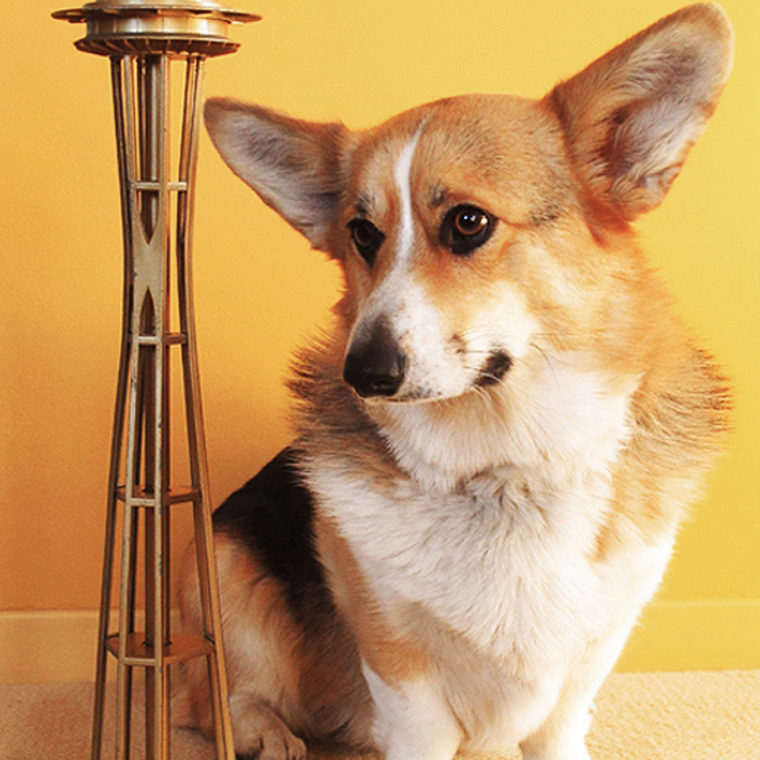 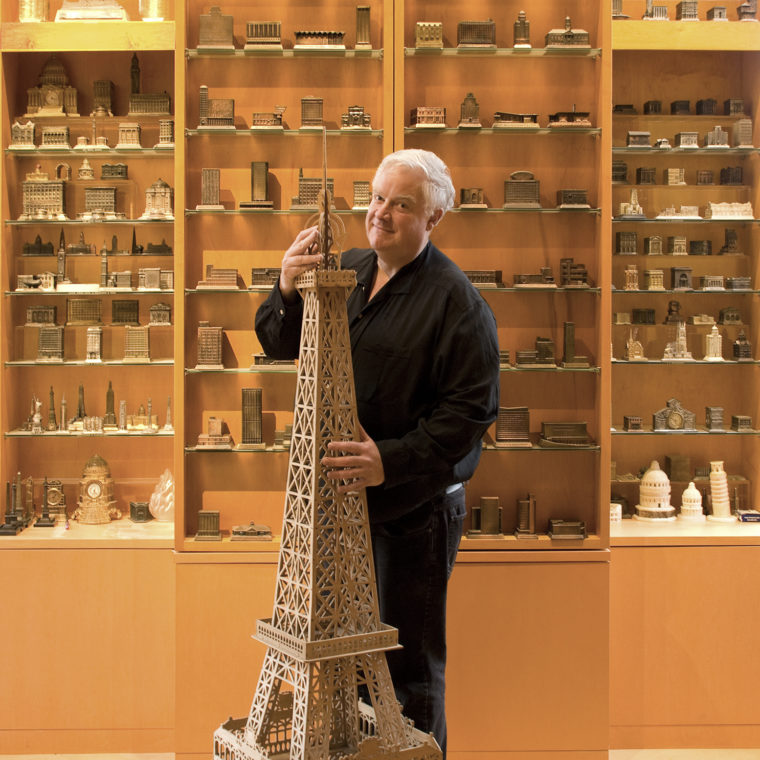 This unusually large, c. 1900, jigsaw cut wood model of Paris’ Eiffel Tower, is made of interlocking pieces, which slide together, as with a puzzle. To the right is the collector (b. 1952), while beyond are a group of early and mid-20th century American cast metal bank building replicas, almost all of which are turned out as coin banks. 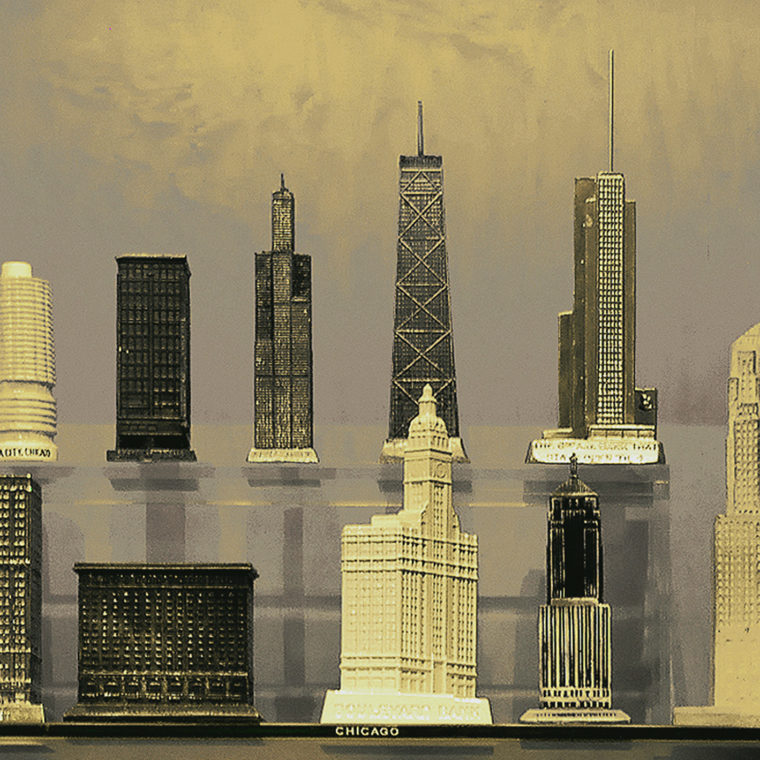 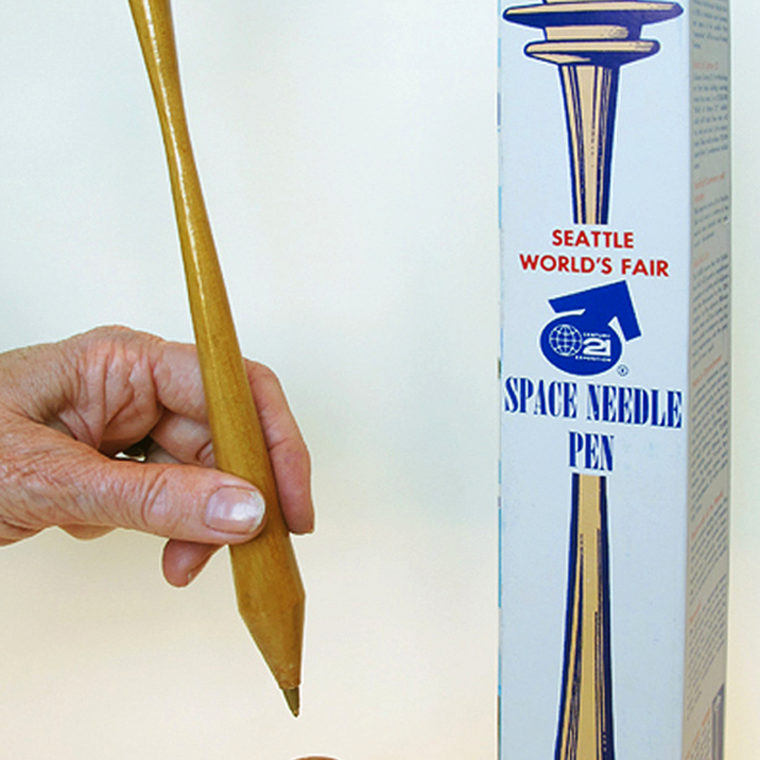 Space Needle Pen. A period souvenir of the 1962 Seattle World’s Fair, this large, turned wood replica of the Space Needle is a rather grand ballpoint pen. 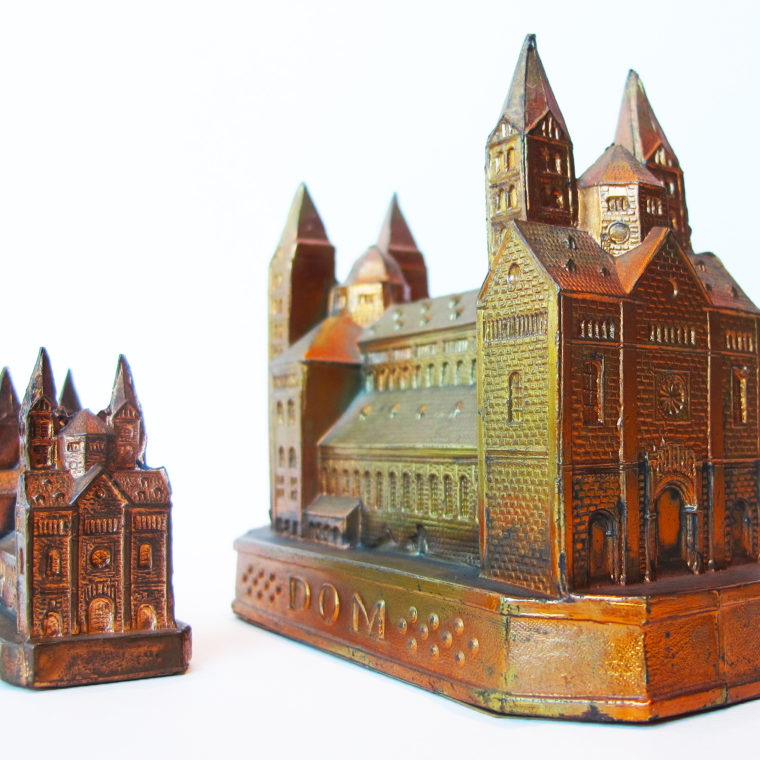 Two Speyer Cathedrals. “Every collection begins with a single object. The small, copper-plated pot metal replica of Germany’s Speyer Cathedral, to the left, a souvenir of a 1976 visit to picturesque European places, in the company of my Uncle, architect Charles Moore, was the first of more than 3,000 objects. My Uncle’s model, to the right, joined the collection after his death.” –David Weingarten

Pisa Lipstick. This gold-plated, cast silver lipstick case replica of Pisa’s famously out of plumb Tower was made in Rome by Nichilo Jewelers c. 1960. 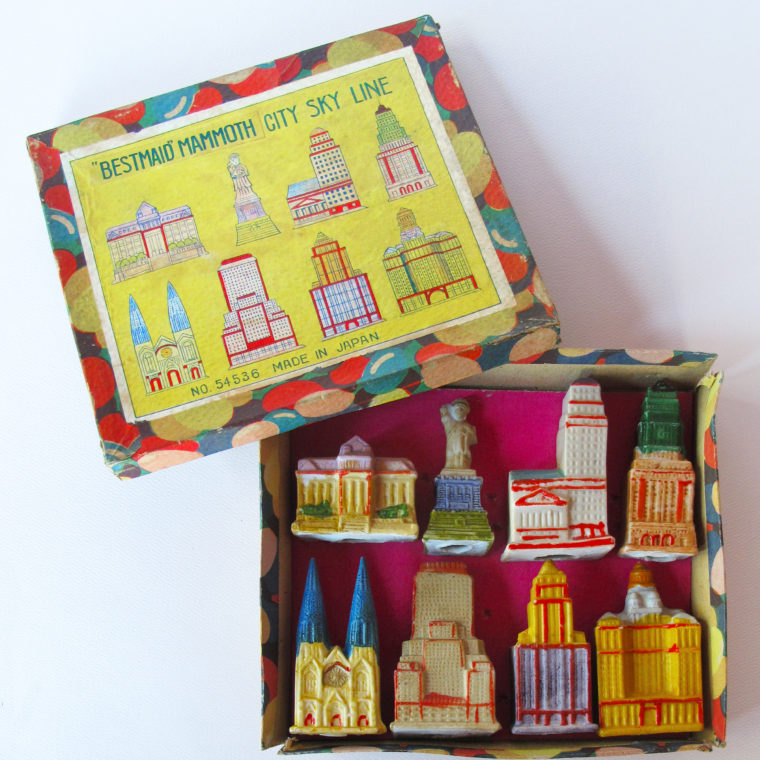 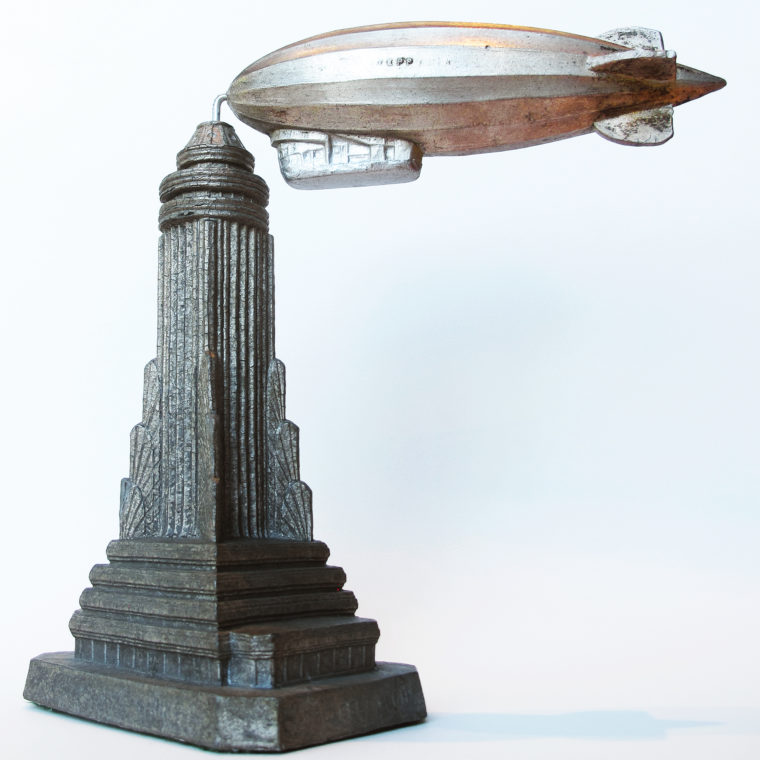 Empire State Building, Mooring Mast with Zeppelin, New York City. When New York’s Empire State Building was completed in 1931, its summit featured a mooring mast, to which lighter than air ships were meant to attach themselves, the very latest in innovative transportation. Unfortunately, the winds were uncooperative, and the idea was soon abandoned. An exceptionally scarce souvenir, cast in pot metal and aluminum. 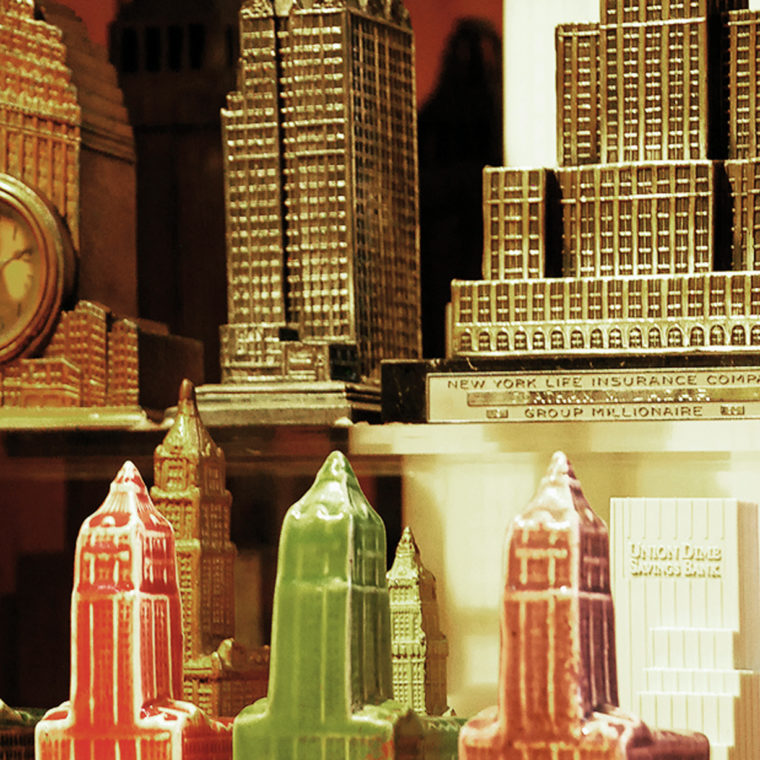 Woolworths. Early and mid-20th century souvenirs of New York skyscrapers. The three color glazed ceramic replicas of the Woolworth Building were molded not long after the building’s 1913 completion, and are made as coin banks, their slots atop the lower roofs. To the upper right is a 1950s chrome-plated pot metal replica of the New York Life Building, produced as an award for those industrious company representatives selling more than a million dollars of life insurance. 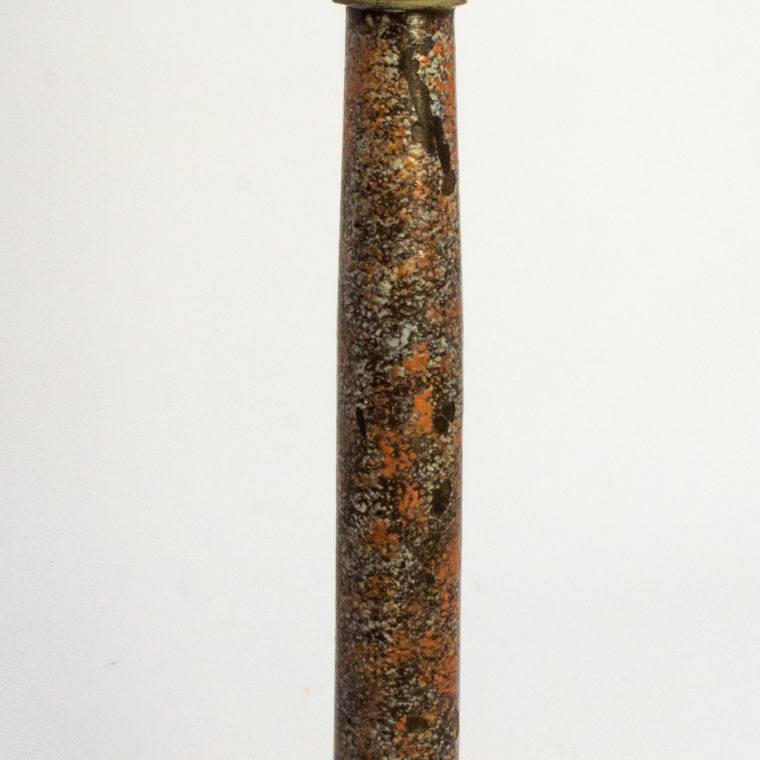