The Museum was saddened to learn of the death of renowned architect I.M. Pei. His achievements were significant, and have left an indelible mark on all of us.

Pei was the second winner of the Henry C. Turner Prize for Innovation in Construction, for advances and high achievement in construction methods and processes. The award ceremony featured a lively discussion with Pei, Leslie Robertson, David Childs, and Carter Wiseman. Wiseman remarked that even after 50 years of practice, Pei “never stopped investigating, reading up, and changing.”

Some of his firm’s work is featured in our collection, including models of the Miho Museum and the Slayton Residence, and photographs by Robert Lautman of Dallas City Hall and the Holocaust Memorial Museum, among many others.

Several of his designs are also memorialized in the 20th Century Souvenir Buildings Collection, which, as a record of popular architecture, necessarily includes Pei buildings.

Of course, Pei has been well represented in National Building Museum exhibitions over the years. In House of Cars: Innovation and the Parking Garage, we featured this parking garage designed by Pei Cobb Freed & Partners:

For Marcel Breuer: Design and Architecture, curator Susan Piedmont-Palladino sat down with Pei to discuss his mentor. She remembers being “enthralled by his stories of being a young architect in Breuer’s office.”

Pei’s sons joined him for a Spotlight on Design lecture in 2001, when they spoke about the Bank of China Head Office Building, a 1.7 million-square-foot project in Beijing. 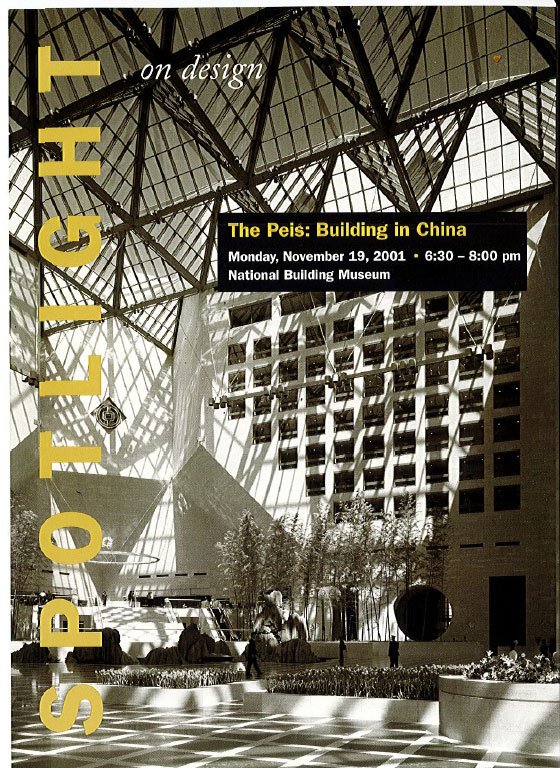 We celebrate Pei and salute a life of immeasurable contributions to the quality of the built environment. Our thoughts are with his loved ones.

The National Building Museum needs your support more than ever.