The National Building Museum announced today that it will present its 2021 Honor Award to global design firm Skidmore, Owings & Merrill (SOM). For the first time in 36 years, and inspired by this year’s honoree, the Museum will transform the annual Honor Award into a Climate Change Call to Action, including weeks of provocative, expert-led online programming open to the public. On June 17, the Museum will present the award to SOM at a dynamic virtual event, acknowledging the firm’s extraordinary contributions to the architectural canon and its historic leadership on the critical issues facing the building industry.

“Even as we celebrate the firm, SOM is challenging all of us by calling for immediate action that recognizes the urgency of climate change and advocates a transformational shift in how we design, build, and do business,” said Anthony Greenberg, Museum Board Chair and Executive Vice President, JBG SMITH. “We are proud to present our 2021 award as a platform for this vital effort. It is a strong reflection of NBM’s ongoing legacy of community and social impact.” The Museum Board also gratefully recognizes Amazon as the event’s Presenting+ sponsor.

“At the onset of a decade that may very well determine the future of our planet, SOM is dedicated to leading the building industry’s response to the climate crisis through action and advocacy,” said Chris Cooper, Design Partner at SOM. “Our programming, which brings together leaders from a variety of fields, will make the case for bold and immediate action to protect the Earth’s resources and to support the transition to a zero-carbon economy.”

Starting on May 19, the Museum and SOM will co-host NBM Climate Action online programming, a weekly series of expert panel discussions exploring the building industry’s role in addressing the climate crisis:

The June 17 Honor Award celebration will offer an evening of entertainment and inspiration. Hosted by Tony Kornheiser of ESPN’s Pardon the Interruption, the event will center around SOM’s Call to Climate Action and feature a roster of community and industry luminaries, including a live Q&A after-party. Corporate sponsorship opportunities are available that provide access to exclusive VIP experiences, including meeting new Museum Executive Director Aileen Fuchs, hearing SOM architects talk about their most innovative projects, and engaging with thought leaders from the pre-event programming.

For the first time since the annual Honor Award was launched, tickets to the event, as well as this year’s associated programming, are available to the general public. Visit NBMVirtual.org for programming information and event tickets and to learn more about sponsorship opportunities. Attendance to the Honor Award event and the NBM Climate Action programs is free for individual Museum members and students.

ABOUT THE 2021 HONOR AWARD RECIPIENT 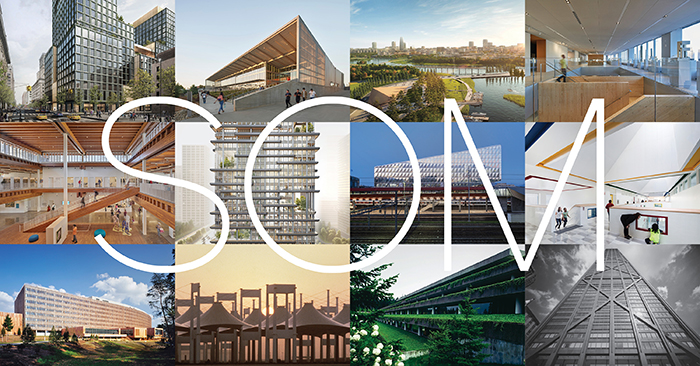 Skidmore, Owings & Merrill (SOM) is a collective of architects, designers, engineers and planners, responsible for some of the world’s most technically and environmentally advanced buildings, and significant public spaces. From a strategic regional plan to a single piece of furniture, SOM’s designs anticipate change in the way we live, work and communicate, and have brought lasting value to communities around the world. The firm’s approach is highly collaborative, and its interdisciplinary team is engaged on a wide range of international projects, with creative studios based across the globe.

ABOUT THE NATIONAL BUILDING MUSEUM
The National Building Museum inspires curiosity about the world we design and build. We believe that understanding the impact of architecture, engineering, landscape architecture, construction, planning, and design is important for everyone. Through exhibitions, educational programs, and special events, we welcome visitors of all ages to experience stories about the built world and its power to shape our lives, our communities, and our futures. Public inquiries: 202.272.2448, info@nbm.org, or visit www.nbm.org. Connect with us on Facebook, Instagram, and Twitter.

ABOUT THE HONOR AWARD
Bestowed each year at the National Building Museum’s Annual Gala since 1986, the Honor Award recognizes individuals and organizations that have made significant contributions to our built heritage. Recipients are leaders who have defined our culture, developed our communities, and crafted our built environment. Individually, they have advanced our building arts and sciences. Collectively, their legacy is profound. Previous recipients: