On Saturday, November 10, the Museum will screen The People and the Police, a film documenting the early, turbulent years of Washington, D.C.’s experiment in police-community relations.

In advance of the program, we spoke with Derek Musgrove, moderator and associate professor of history at University of Maryland-Baltimore County and co-author of Chocolate City: A History of Race and Democracy in the Nation’s Capital.

NBM Online: What first led you to studying D.C. history and activism as a historian?

Derek Musgrove: I am answering this by including a passage from the acknowledgements of Chocolate City:

“This book has its origins in a cancelled class. In 2009, George Derek Musgrove’s “African American History” course at the University of the District of Columbia under-enrolled, and the powers that be terminated t

he class on the first day. Derek was assigned a new course: “History of the District of Columbia.” A Baltimore native with no background in D.C. history, he stumbled through the ensuing semester, hurriedly reading any book on the District he could get his hands on just moments before heading to class. 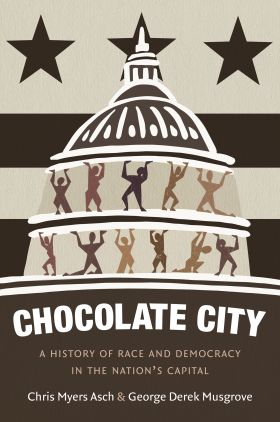 A lover of self-deprecating stories, Derek shared his D.C. History woes with Chris Myers Asch, a D.C. native who had returned to his hometown and taken a position at UDC. We had become fast friends not simply because we were among a tiny handful of 30-somethings teaching at UDC but also on the strength of our shared history with Freedom Schools. Derek had worked for the Children’s Defense Fund’s Freedom School Program for much of the 1990s, and Chris had co-founded and run the Sunflower County Freedom Project, a non-profit program in rural Mississippi modeled on the Freedom Schools of the 1960s.

Derek encouraged Chris to join him in tackling the D.C. History course, and we jointly rewrote the syllabus. After teaching the course, both of us mused that “someone” should write a good survey text on race and democracy that captured students’ attention and addressed the themes we emphasized in the course.

Enterprising historian that he is, Chris thought that that “someone” should be us. He wrote a proposal in 2011 and suggested that Derek join him in producing just such a book.”

As a professor what do you think is the historian’s duty in educating new generations?

It is our very reason for being.

What’s your favorite example of activism in action from the past 50 years?

Easily it is Walter Fauntroy and Self Determination for D.C.’s effort to pass the D.C. Voting Rights Amendment. With little money and steep odds, this coalition capitalized on liberals’ power in Congress and used Fauntroy’s “arithmetic of black political power” to pressure wavering Senators and got the legislation through both chambers. Though the amendment failed before the states—succumbing to a much better organized and funded New Right counter-campaign—it was nonetheless the closest the city has come in 200 years to gaining a vote in Congress.

Join us on November 10 to hear more from Musgrove and a discussion about how activism continues to shape our city.