Charles Dickens once called Washington a city of magnificent intentions. This humorous epithet notes that the young capital had not quite lived up to expectations by 1842, but it also acknowledges that the statesmen who planned the city aimed for greatness. Over the course of two centuries, the nation’s capital has grown to fulfill many of their hopes. Today, the revered Capitol and White House, the stately offices of government, the iconic monuments and museums, and the sweep of the Mall and the city’s many public parks all evoke the ideals of democracy in the 21st century.

Created by the government, for the government, Washington was bound to differ from other American cities. Here, the local needs that all cities share—for housing, transportation, water and power utilities, commercial centers, and community institutions—vie directly with national priorities. More than half a million residents now live in the District, in more than 100 neighborhoods. This exhibition explores how residents experience the city and how Washington itself expresses the tension between the demands of a working seat of government and the desire for a national symbol, and the hopes and needs of an evolving city.

The City of Intent

The vision of a home for the government became reality on July 1, 1790, when Congress decided to place the seat of government at the nation’s geographical center and authorized President George Washington to select a specific site on the Potomac River-a location that he strongly favored. Placing the capital here fulfilled political, not practical aims, to calm squabbling northern and southern interests. The new federal district was remote from almost everything important to the business of running the country and almost entirely undeveloped.

President Washington devoted his attention to the federal city, which was named for him on September 9, 1791. Conscious that the states still hesitated to cede power to a federal government and that Europeans watched for weakness in the United States, he championed grand formal architecture to bolster the government’s authority. With Secretary of State Thomas Jefferson, he oversaw competitions to design a President’s House and Capitol. Both were nearly destroyed by the British during the War of 1812. Both were rebuilt and repeatedly renewed as the country has grown. Today, they stand as potent symbols of the American nation.

The city’s great public buildings and broad avenues grew out of the imagination of Peter Charles L’Enfant, whom George Washington handpicked to design the capital. This Frenchman, who so admired America that he preferred to call himself Peter rather than Pierre, soon resigned over disagreements with the city’s planners, but his plan has persisted. More than a century later, in 1902, the Senate Park Commission, popularly known as the McMillan Commission, rededicated the Mall to L’Enfant’s ideals and gave the capital its modern identity.

The broad green carpet of the Mall now stretches more than two miles, from Capitol Hill to the Arlington Memorial Bridge. On this huge stage, thousands of citizens can exercise their First Amendment rights-or two can toss a Frisbee. The museums and memorials along its length draw visitors from the city, the nation, and the world. The Mall has become the scene of pastime, patriotic pageantry, and powerful protest.

Beyond the Mall lie neighborhoods that reflect societal and governmental influences. Wars and expansions of the federal government have brought surges in population and fierce competition for housing. Row houses dominated the streetscape until the mid-1800s and later flourished in a building boom between the world wars. After the Civil War, rising land values and safer elevators led to the first tall apartment buildings as development advanced northward.

Local community institutions and commerce responded to national strictures. As early as the mid-1800s, Howard University and the city’s African-American schools attracted the country’s brightest black scholars and students. Segregation gave rise to an “alternative downtown” in the Shaw neighborhood for Washingtonians shunned in the stores along F Street. By the 1960s, however, suburbanization and integration were altering both downtowns.

The growth of Washington’s transportation systems has profoundly affected the city. Bridges spanning Rock Creek opened the northwest suburbs to development in the early 1900s, while the lack of adequate trolley service thwarted development in Anacostia. When government offices began to move from the District in the 1940s, newly built highways gave rise to suburbs that drew population and commerce out of the city. Although the Metrorail system eased traffic in the growing metropolitan region, roadways remained strained.

By the early 1900s, the government had grown so much that only a vast building program could accommodate it. As World War II approached, overcrowding pushed federal buildings out of the District, beginning with the Pentagon in 1943. The government’s oversight and purse strings have always raised the question of who controls the land in the District. Several massive federal programs, including a failed inner loop highway system, and the clearing of Southwest in the 1960s, have engendered public resistance. Others have clearly changed the city for the better. The neoclassical Federal Triangle area replaced slums and a red-light district. The Smithsonian Institution has grown from one to many world-renowned museums.

Parkland and public space have always been central to city planning in the District. Now, questions arise about how best to balance preservation and use. Rock Creek Valley presented a nearly impassable north-south barrier before the automobile age but today carries a high volume of traffic. L’Enfant’s plan created numerous circles and squares that would be suitable for memorials, but the Mall has always been the most desired location. To assure future generations of cultural and commemorative space, the National Capital Planning Commission now encourages distribution of memorials throughout the city.

Connecting the Capitol and the White House, Pennsylvania Avenue has always been the city’s ceremonial “Main Street,” although its appearance belied its importance for much of its history. Lined by motley buildings, it remained unpaved until the 1870s, and train tracks crossed it until the early 1900s. 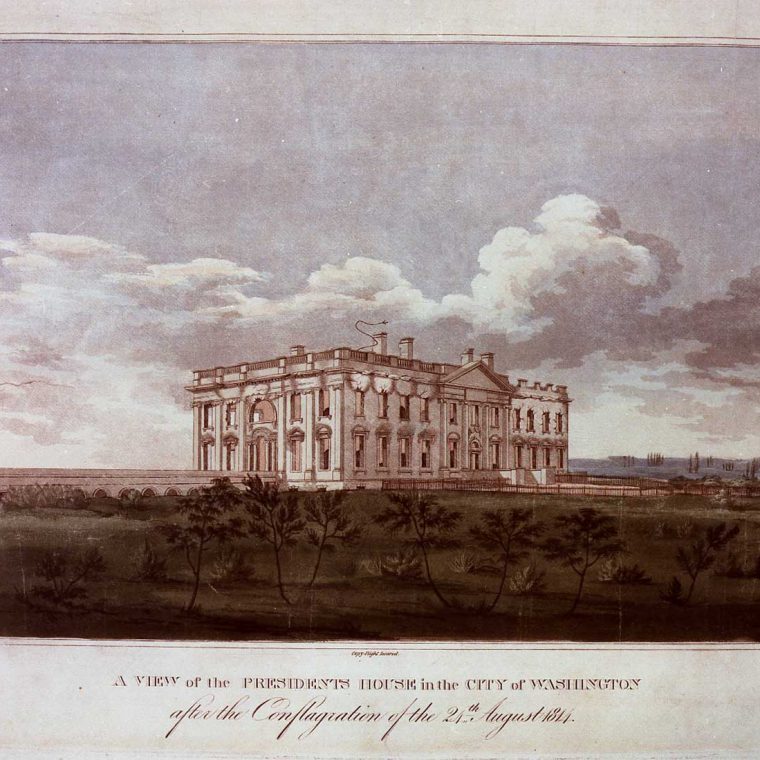 A View of the President’s House in the City of Washington after the conflagration of the 24th August 1814, color aquatint by W. Strickland after George Munger, ca. 1814. Courtesy Library of Congress, Prints and Photographs Division. 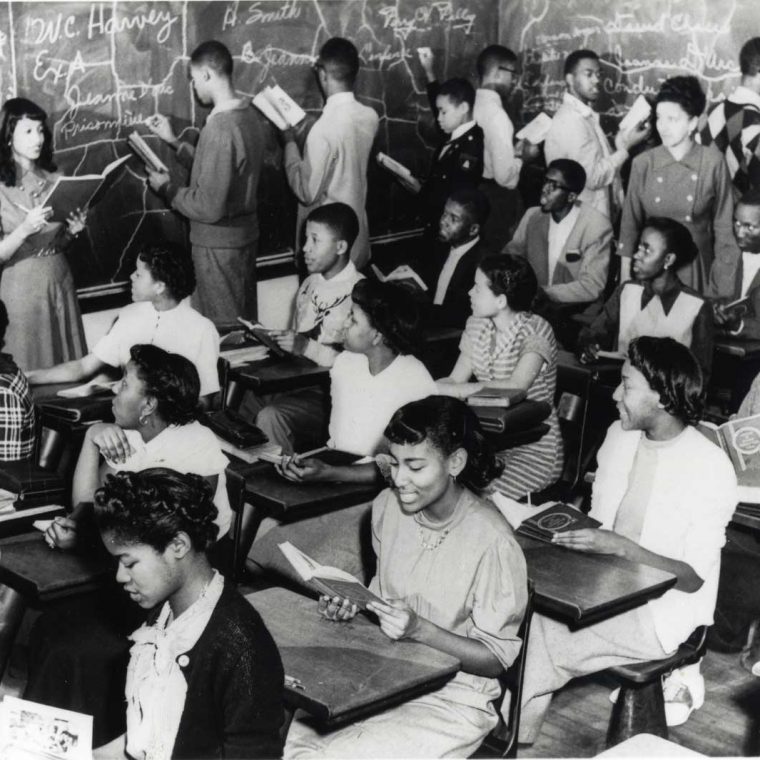 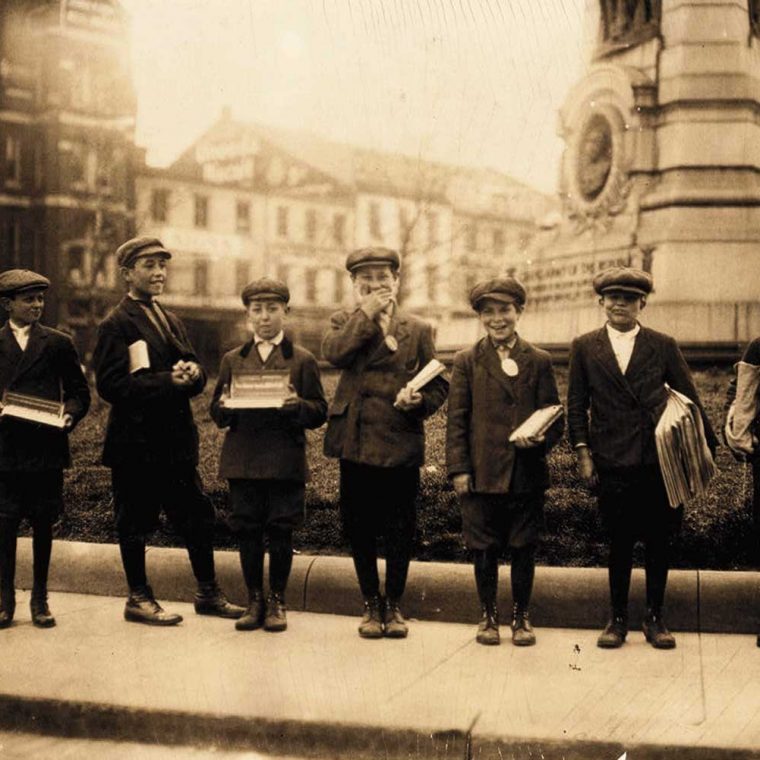 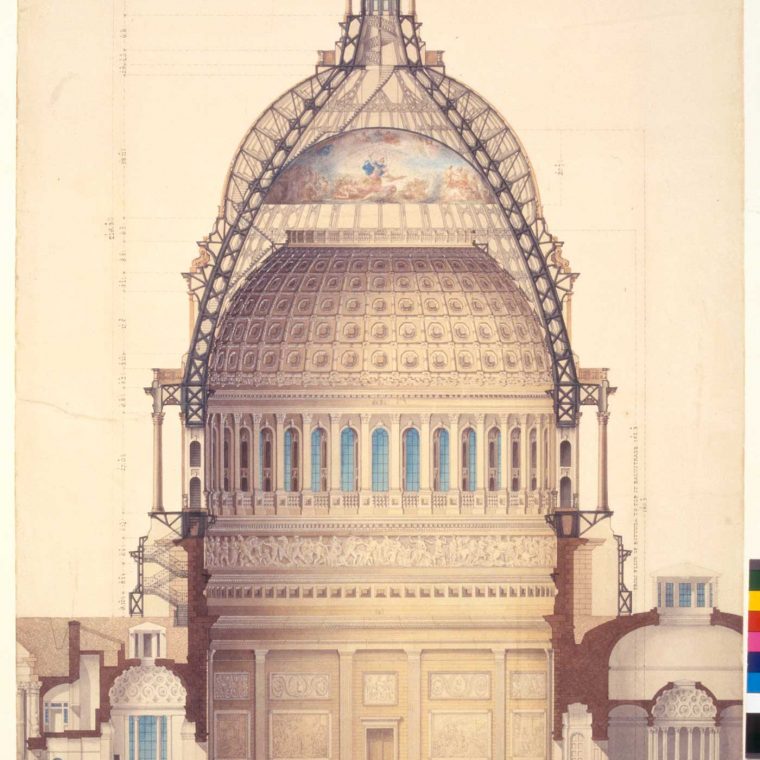 Section through Dome of U.S. Capitol. Architect of the Capitol Thomas U. Walter, 1855. Courtesy Library of Congress, Prints and Photographs Division. 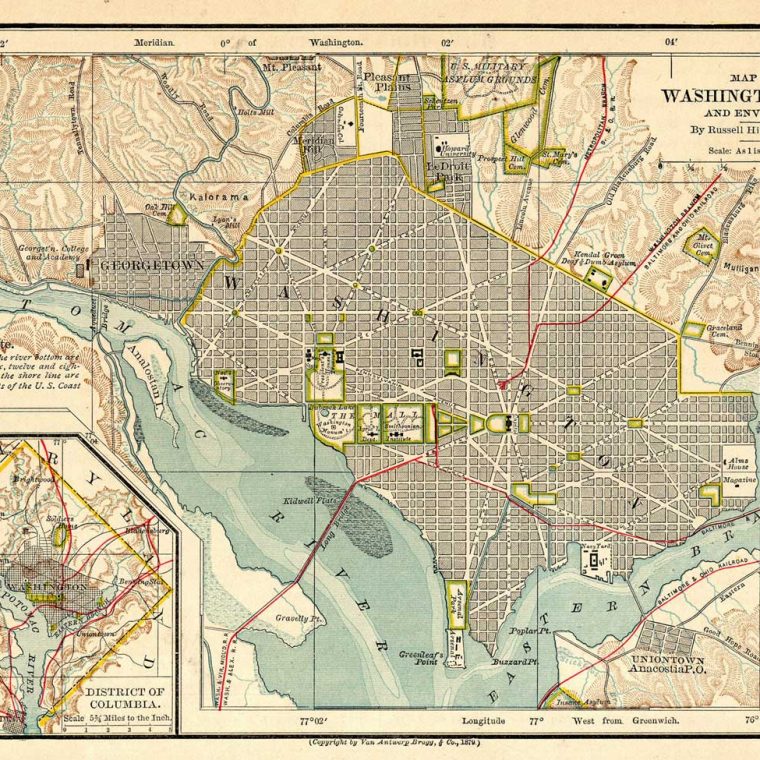 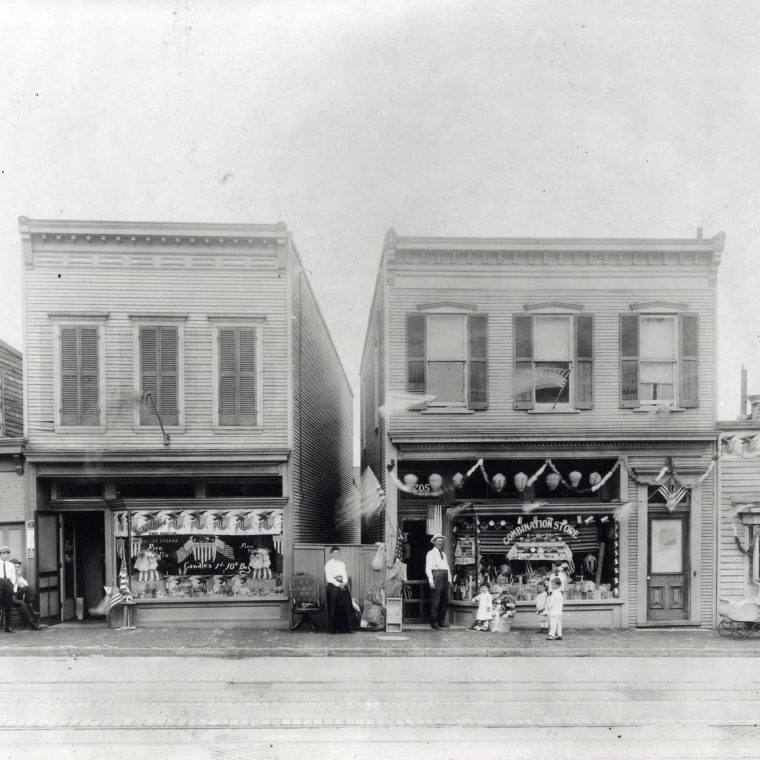 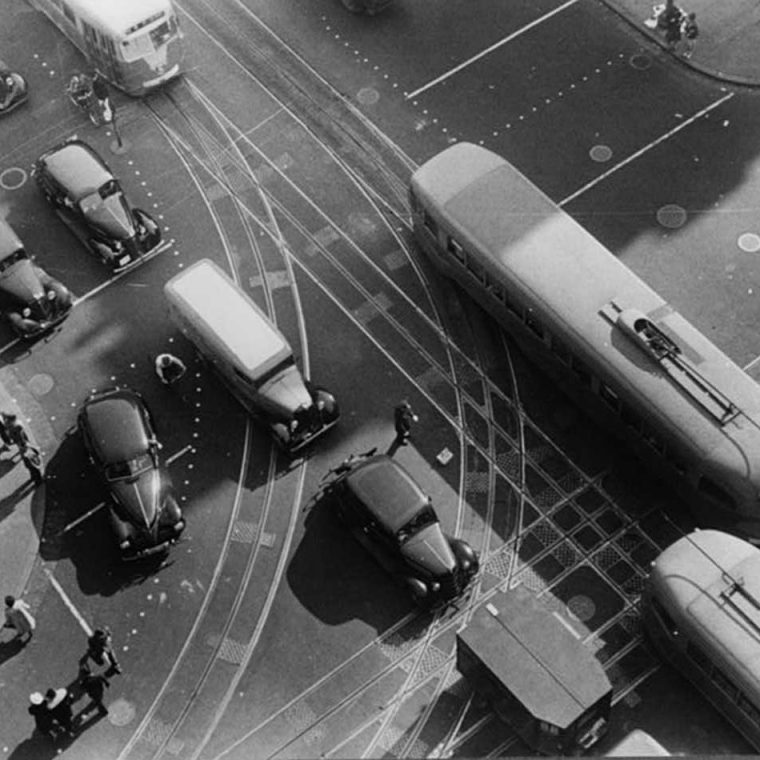 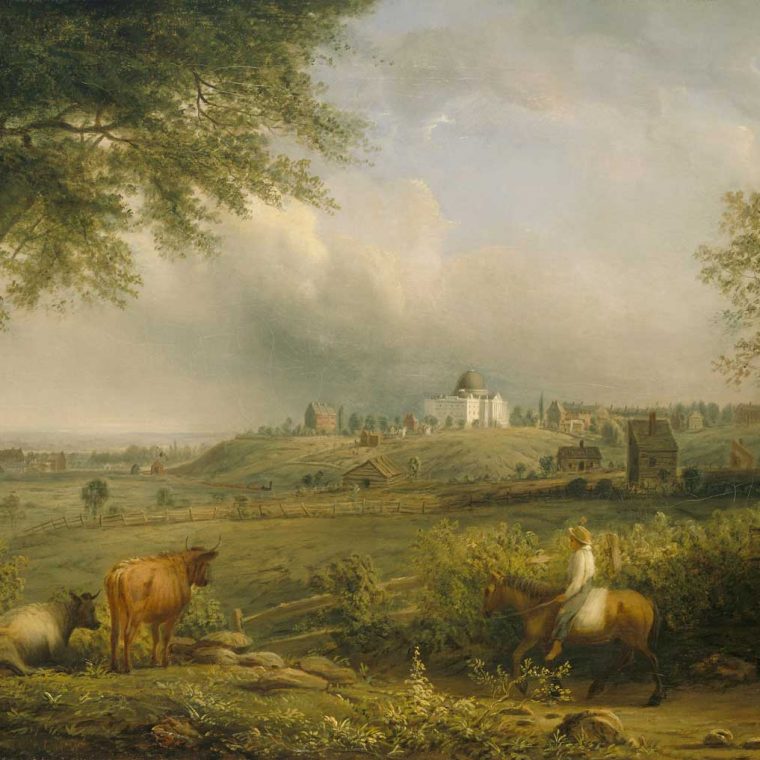 A Glimpse of the Capitol, William McLeod, 1844. Photo by Will Brown, courtesy Diplomatic Reception Rooms, United States Department of State. 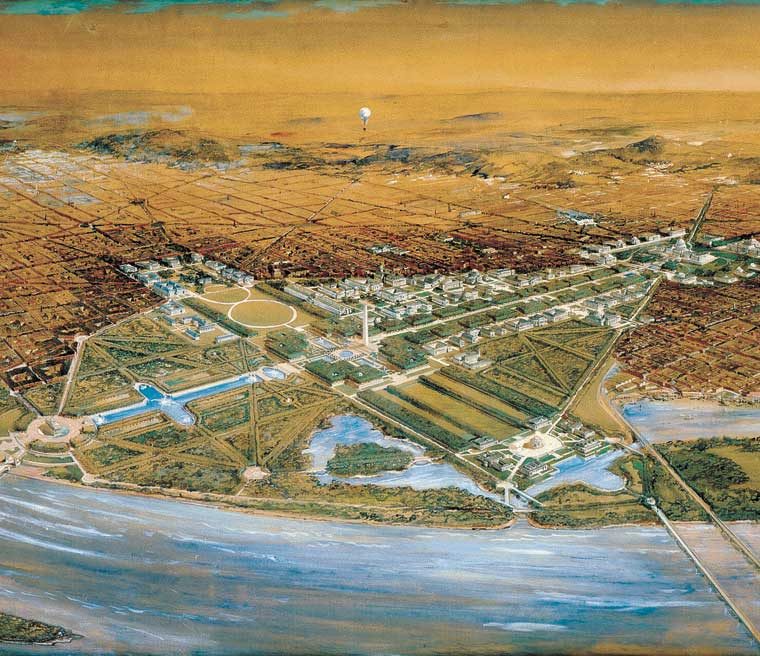 Initial research for the exhibition’s redevelopment was generously funded by additional grants from the Eugene and Agnes E. Meyer Foundation and the HUMANITIES COUNCIL OF WASHINGTON, D.C.