The Towers of the WTC: 51 Years of Photographs by Camilo José Vergara

On September 27, 2021, MacArthur Fellows Ben Katchor, a cartoonist and keen observer of New York City, and Camilo José Vergara, photographer and sociologist, offered their personal experiences and insights on one of the most discussed urban districts in the United States. The program was moderated by Elihu Rubin, associate professor of architecture, urbanism, and American studies at Yale.

This program was supported by a grant from the John D. and Catherine T. MacArthur Foundation.

This exhibition is dedicated to those who perished, those who responded, and those who are rebuilding after September 11, 2001.

Few urban districts in modern history have been more discussed than Lower Manhattan, and the World Trade Center (WTC) has held a prominent place in accounts of the area since it was completed in 1973. Radio Row, a viable neighborhood, had to make way for the Twin Towers, which were widely criticized on both aesthetic and political grounds; many regarded them as soulless behemoths and arrogant symbols of American imperialism. But their destruction brought a kind of horror not previously seen in the United States, and triggered years of wars and political instability in distant countries.

I closely followed the construction of the towers, watching heavy trucks bring in steel or haul away dirt amid the noise of jackhammers and clanging metal. As they rose to become the tallest buildings in the world, I regarded them as a wild expression of mistaken priorities in a troubled time. More than half a million Americans were fighting in Vietnam, and many parts of New York were crumbling, segregated, poor, and violent. This reality shaped my early encounters with the towers, and I tried to convey my feelings by photographing them with homeless people in the foreground, or in harsh sunlight that turned the buildings into gleaming blades. It seemed impossible that I would outlive them.

Eventually, my early resentment faded, and I grew to see them as great human creations—such simple shapes that could reflect passing clouds in summer and turn into shafts of amber on late afternoons in winter. As I traveled farther away to photograph the towers from distant boroughs, they seemed to lose their solidity and become mysterious, fantastic, and alluring. I liked seeing them in the background of my photos as they rose above houses, waterways, vegetation, junkyards, expressways, and elevated trains.

For nearly two decades the Twin Towers dominated Lower Manhattan. Then, in the 1980s and ’90s, Battery Park City, erected on landfill extracted from the WTC site, came between them and the waterfront. Gradually, the entire southern end of the island became bounded by a massive assemblage of shiny new buildings.

On September 11, 2001, the WTC area went from being a place symbolizing pride and power to one of smoking rubble and death. There has been much rebuilding and renewal since then, including several landmarks designed by star architects built to the north, east, and south of the land once occupied by the towers. I’ve photographed the rise of new skyscrapers built around the memorial pools honoring those who died. The tallest, darkest, and most fortified tower, One World Trade Center, stands disconnected from the memorial, the museum and the rest of the complex. Now, many fear that a remote workforce engendered by the pandemic will continue to haunt this largely empty district. And so yet another chapter in the history of the area begins.

On 125th Street in Harlem, the sight of a T-shirt depicting the skyline before 9/11 stopped me cold. It was labeled “Old New York.” 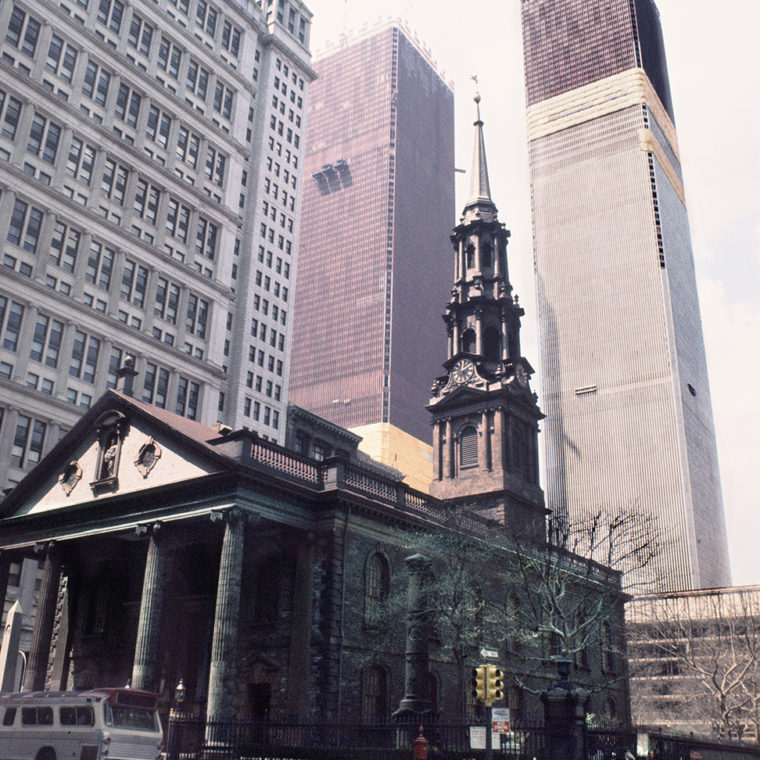 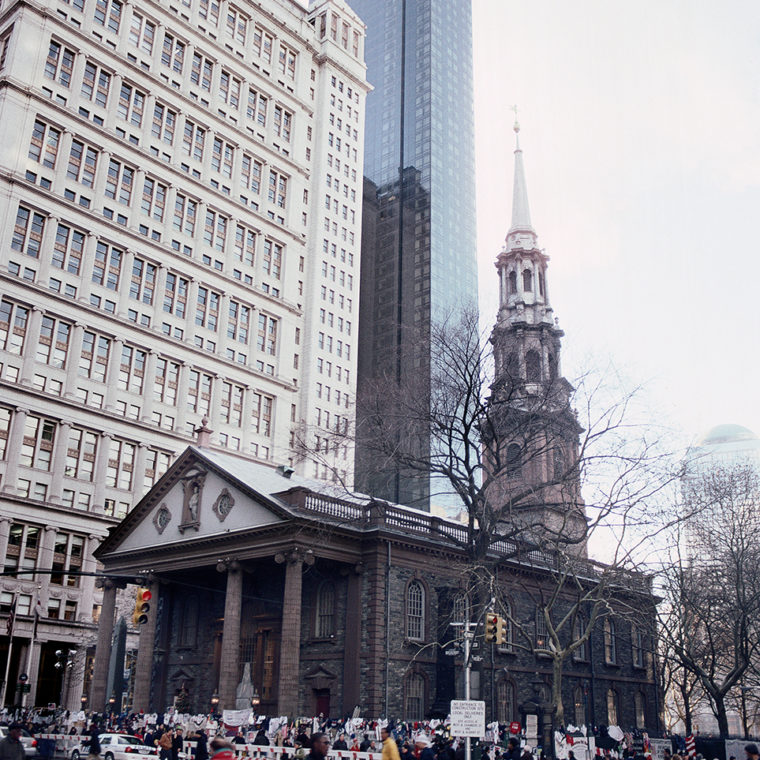 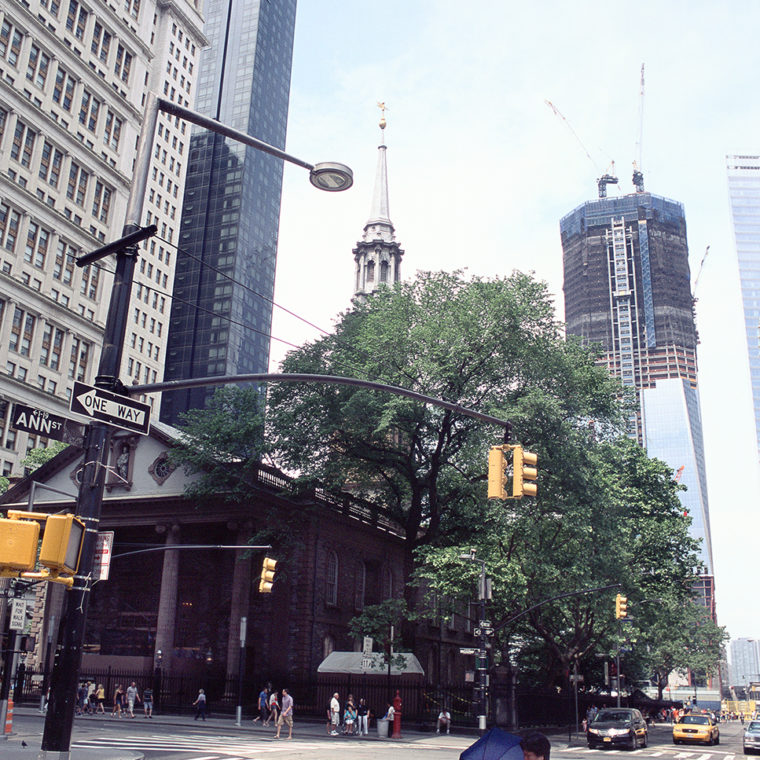 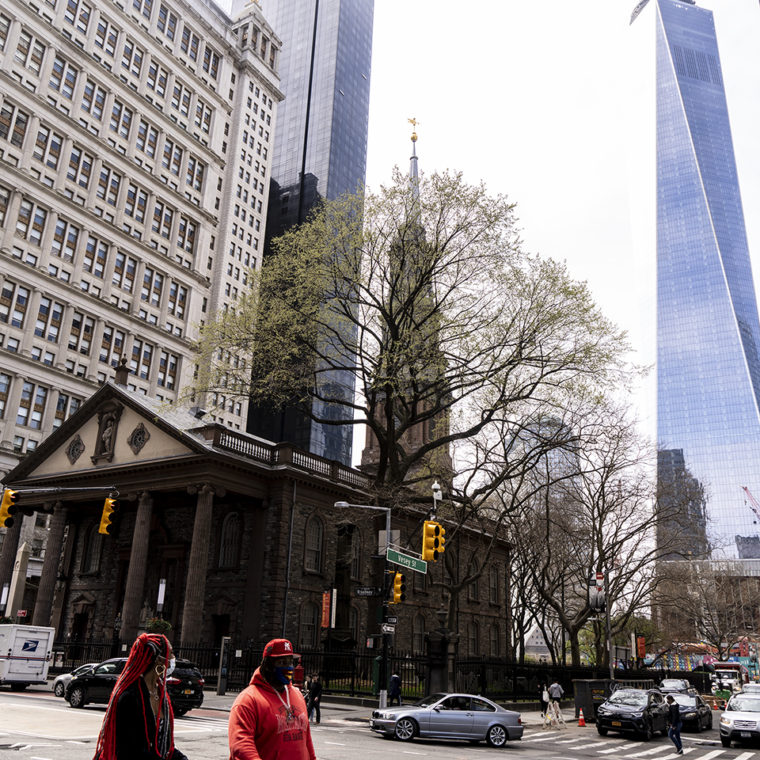 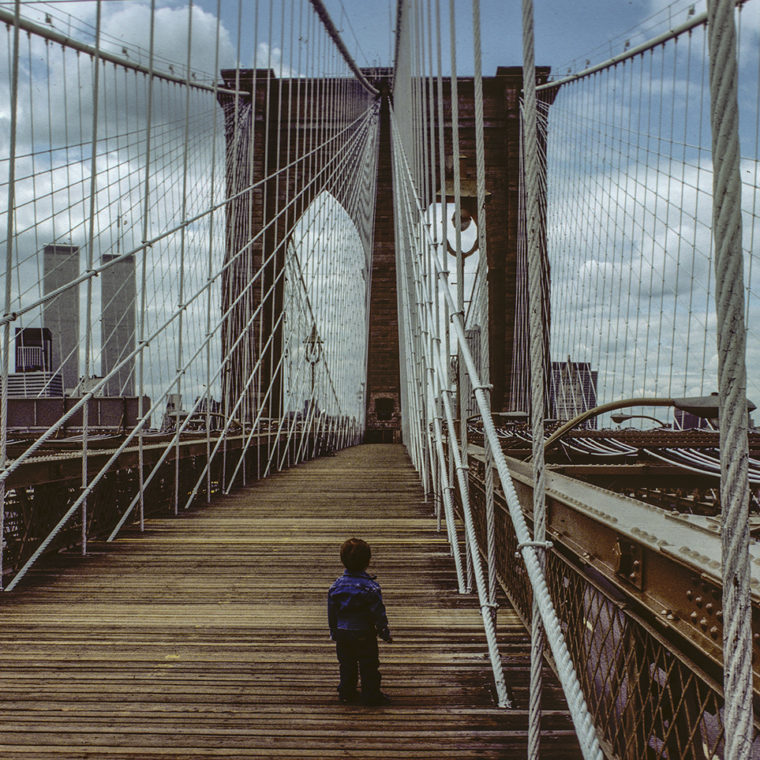 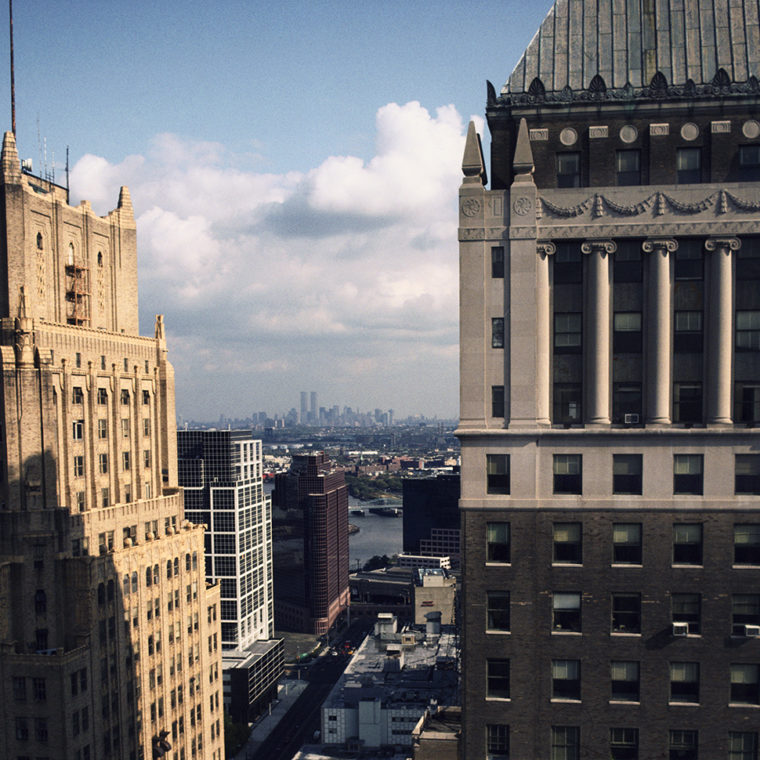 View east from downtown Newark, New Jersey (in the foreground from left to right: the Lefcourt Newark and National Newark Buildings); 1992. 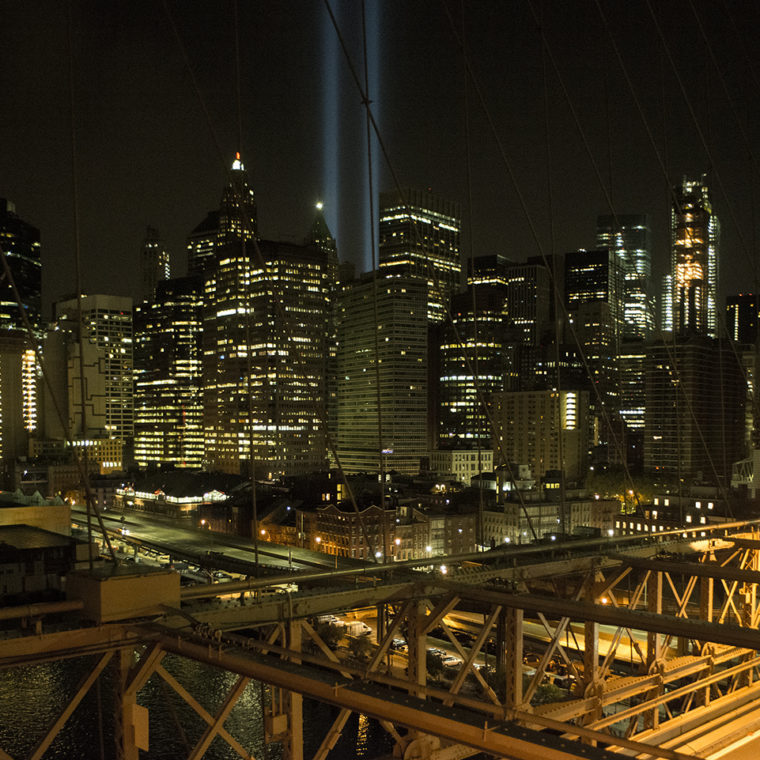 View west from the Brooklyn Bridge capturing the annual September 11 “Tribute in Light,” a commemorative art installation that recreates the shapes of the towers, Brooklyn, New York; 2017. 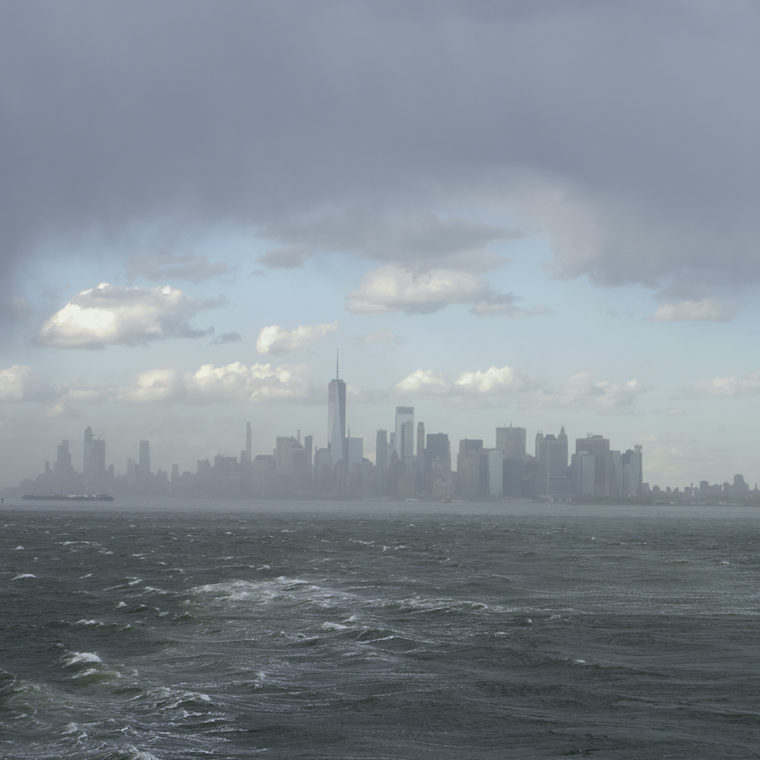 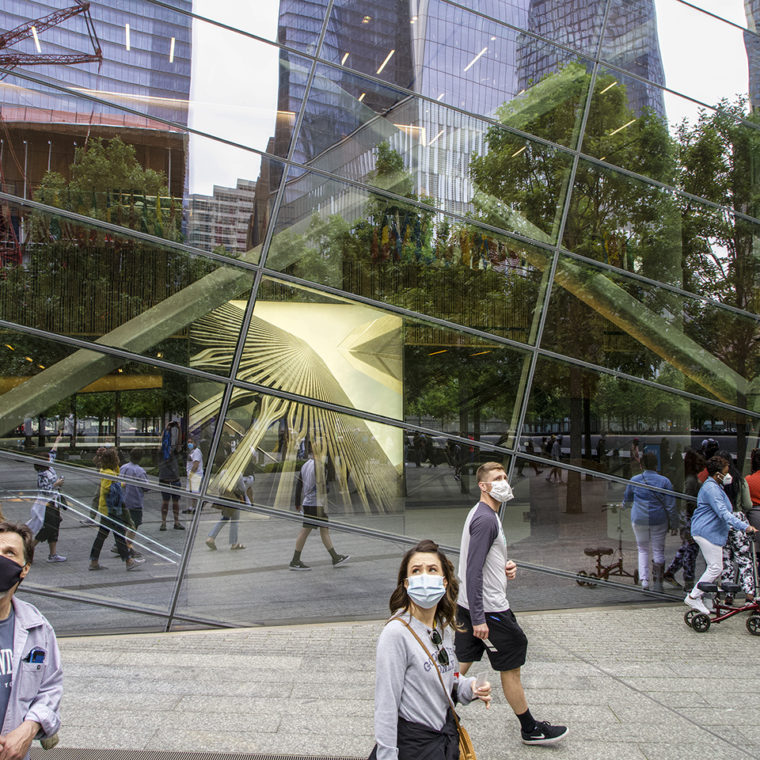 Camilo José Vergara is one of the nation’s foremost urban documentarians. He was honored with a National Humanities Medal by President Barack Obama in 2012 and was named a MacArthur Fellow in 2002. Born in Santiago, Chile, Vergara’s photography has been informed by both his outsider’s eye and his training in sociology at the University of Notre Dame and Columbia University.

His photographs—acquired by the Library of Congress, the J. Paul Getty Museum, and the New Museum of Contemporary Art, among other institutions—have been the subject of numerous exhibitions, books, essays, and lectures.

The Towers of the WTC: 51 Years of Photographs by Camilo José Vergara is presented as part of a continuing collaboration featuring his images of the World Trade Center. The 20-year partnership with the National Building Museum began in the immediate aftermath of the September 11, 2001, terrorist attacks with the exhibition Twin Towers Remembered and the co-publication of an accompanying catalogue with Princeton Architectural Press.

Driven to document America’s inner cities, Vergara began recording New York City’s urban landscape in 1970, the year he settled there. Since 1977, he has systematically photographed some of America’s most impoverished neighborhoods—repeatedly returning to locations in New York, Newark, Camden, Detroit, Gary, Chicago, and Los Angeles. His most recent work captures the effects of the Coronavirus in poor, segregated communities across the New York metropolitan area. See his three-part 2020 online Museum exhibition here.