“You hear those numbers all the time, but you never tie names to them. I wanted you to see who my son was.” —Pamela Bosley, mother of Terrell Bosley, Co-founder of Purpose Over Pain

Memorials are works of art and architecture that embody collective experience and provide a space for remembrance. Presented in conjunction with Justice is Beauty: The Work of MASS Design Group, the Gun Violence Memorial Project is a tribute to the thousands of lives lost to gun violence in America.

The Gun Violence Memorial Project comprises four houses, each built of 700 glass bricks, a reference to the number of people in the U.S. killed by guns every week. Over time, the bricks will continue to be filled with remembrance objects donated by immediate family members of loved ones taken by gun violence. The houses currently hold hundreds of objects—including photographs, baby shoes, graduation tassels, jewelry, a jump rope, and a prayer book—that reveal the personal narratives of each victim. Scroll down for information on how to donate.

“Our goal was to communicate the enormity of the epidemic while also honoring the individuals whose lives have been taken. The recognizable form of the wood lattice and glass houses are but the framework in which the more intimate narrative is shared; the memorial is the willingness of families to share personal artifacts and stories of their loved ones.” —Jha D. Williams, MASS Design Group

The National Building Museum is the Gun Violence Memorial Project’s second installation; it was first installed as part of the 2019 Chicago Architecture Biennial. The Memorial was conceived by MASS Design Group and conceptual artist Hank Willis Thomas in partnership with gun violence prevention organizations Purpose Over Pain and Everytown for Gun Safety Support Fund. Inspired by the NAMES Project AIDS Memorial Quilt, the hope is to create a permanent national memorial that honors the lives and narratives of victims of gun violence, using the current design as a prototype.

Also featured within the gallery are video excerpts from Comes the Light, a forthcoming documentary about the effects of gun violence produced by Caryn Capotosto and directed by Haroula Rose. Interviews filmed in Washington, D.C., and Chicago capture stories about lives cut short and the objects chosen to represent them within the Memorial.

Both on-site and virtually, visitors can honor many of the lives reflected in the Gun Violence Memorial Project by exploring Moments That Survive, a digital storytelling campaign in which survivors share how their lives changed forever as a result of gun violence. Moments That Survive builds community among survivors and helps the public understand the many repercussions of gun violence. Twenty-five objects included in the Memorial are also commemorated in the online Moments That Survive Memory Wall. The installation concludes with a space of reflection and a call to action, offering visitors takeaway cards with information about local resources for survivors and allies.

No ticket is required to experience the exhibition, thanks to the generous support of Everytown for Gun Safety Support Fund. The Gun Violence Memorial Project is located on the Museum’s ground floor, next to the Museum Shop.

The Gun Violence Memorial Project is an active and living memorial, remembering lives taken by our ongoing epidemic of gun violence.

Over the course of its stay at the National Building Museum, we will continue to fill these houses with remembrance objects. We encourage immediate family members who wish to donate an object to follow the instructions below.

By sharing a remembrance object that honors someone you love, together we can highlight the human toll of gun violence and inspire visitors to connect with the individual stories.

Please note that the Memorial team has curatorial capacity to determine if a contribution is appropriate for display. Remembrance objects will be added to the Memorial within one month.

We encourage you to reach out to participate@massdesigngroup.org with any questions.

This audio piece, accessible in the exhibition through a QR code, is a selection of StoryCorps conversations that illustrate the indelible impact gun violence inflicts on its victims, survivors, and their families and friends. Special thanks to the participants who bravely shared their stories:

These interviews are provided courtesy of StoryCorps, a national nonprofit whose mission is to preserve and share humanity’s stories in order to build connections between people and create a more just and compassionate world.

If you are in the greater Washington, D.C., area, please visit the TraRon Center, the Alliance of Concerned Men, or Thurgood Marshall Pathways 2 Power for local support.

Consider this booklist for further reading about the toll of gun violence on American communities. 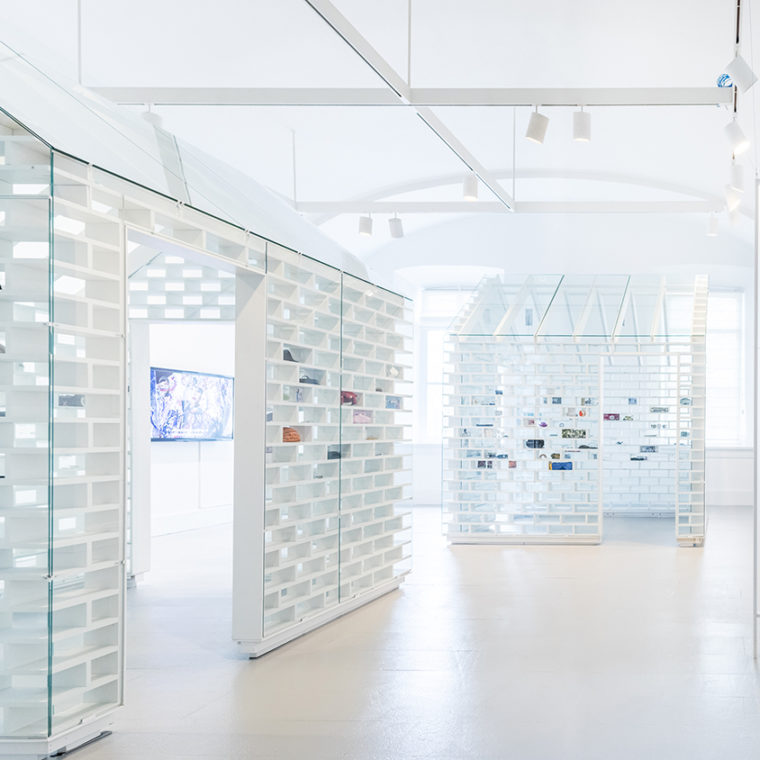 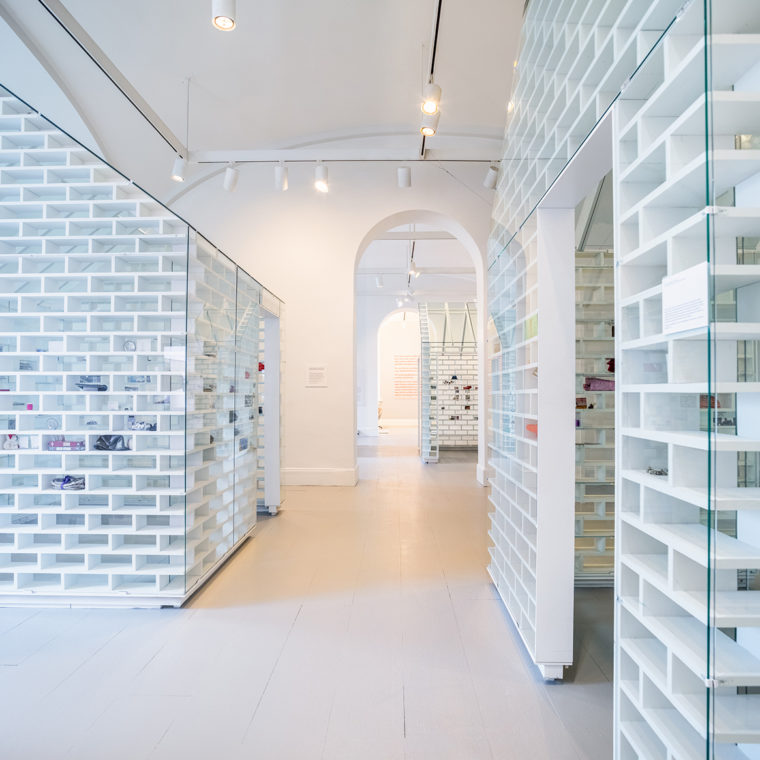 The Gun Violence Memorial Project comprises four houses, each built of 700 glass bricks, a reference to the number of people in the U.S. killed by guns every week. 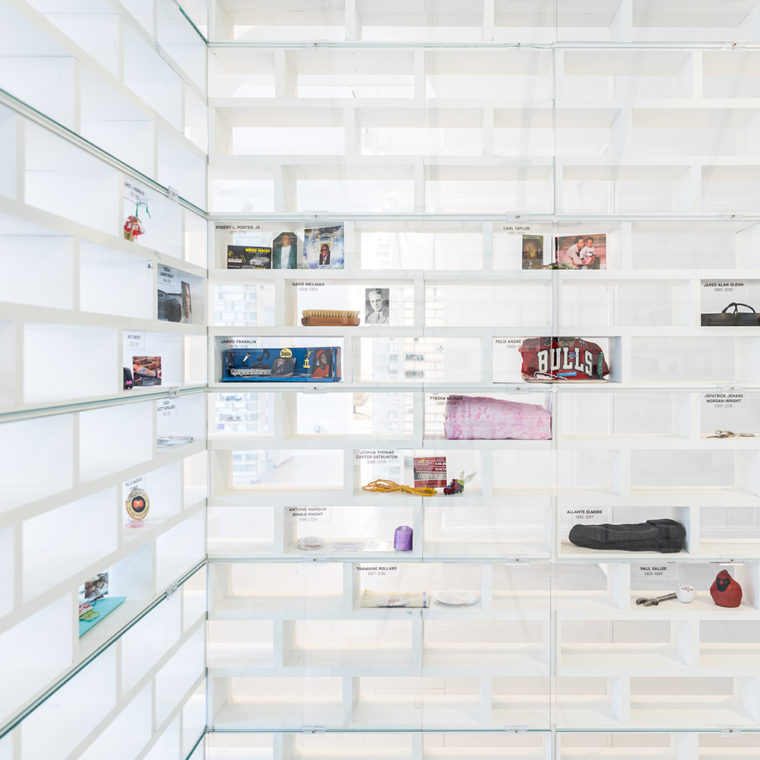 Over time, the bricks will be filled with remembrance objects donated by immediate family members of loved ones taken by gun violence. 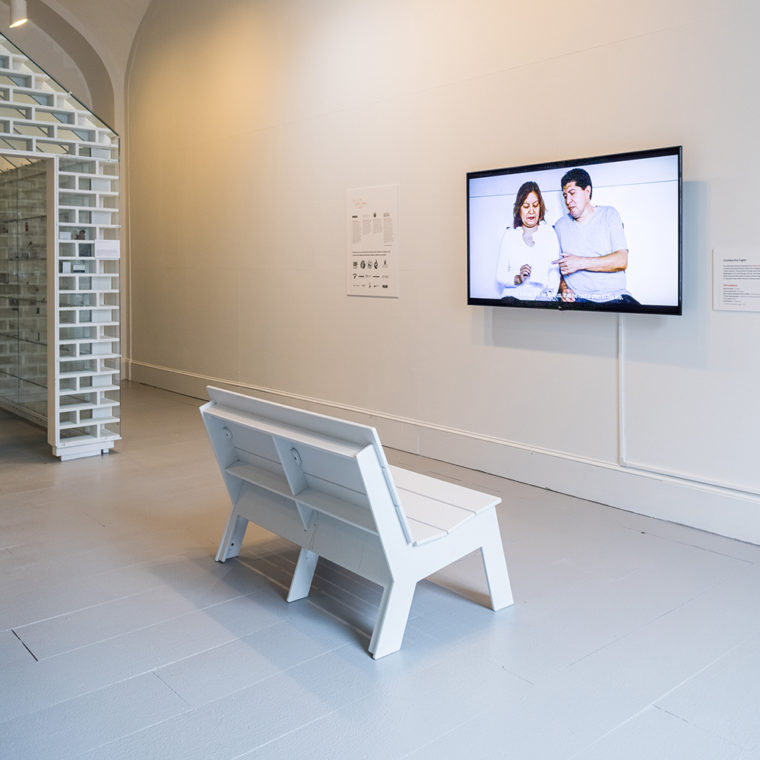 Featured within the exhibition are excerpts from “Comes the Light,” a forthcoming documentary about the effects of gun violence by filmmakers Haroula Rose and Caryn Capotosto. 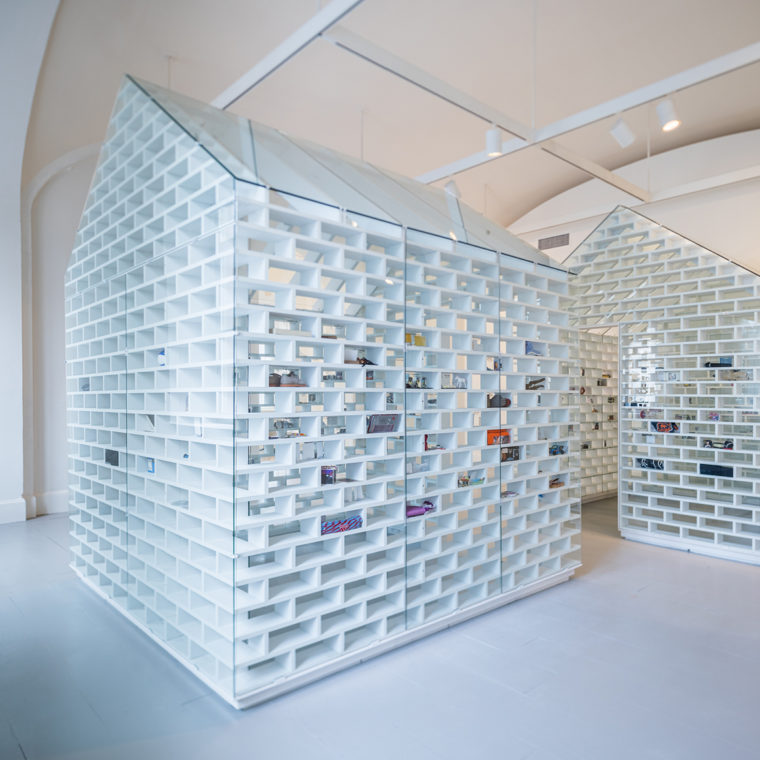 The Gun Violence Memorial Project premiered at the Chicago Cultural Center in September 2019 as part of the Chicago Architecture Biennial. 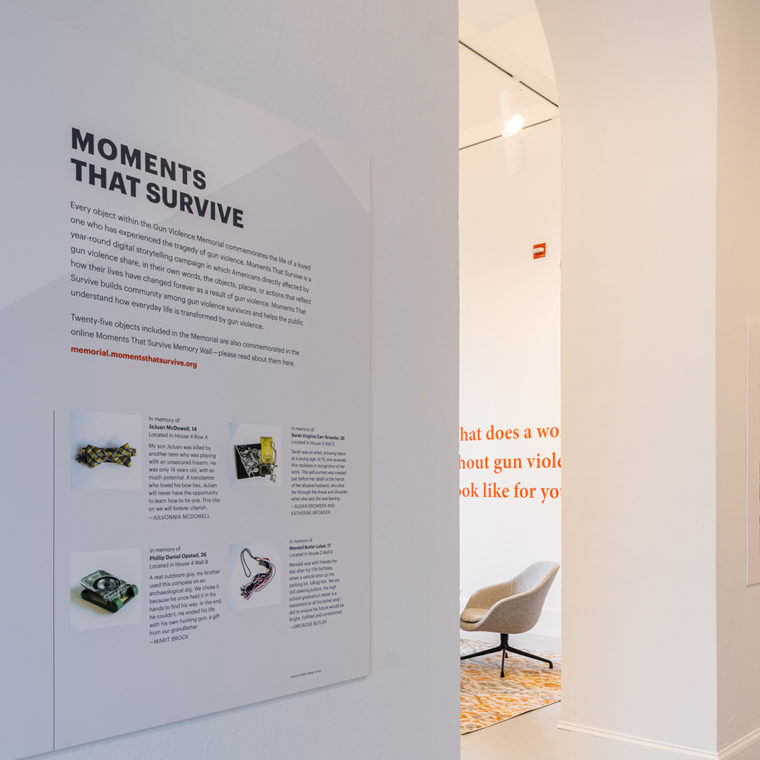 "Moments That Survive" is a digital storytelling campaign that allows Americans directly affected by gun violence to share their stories. 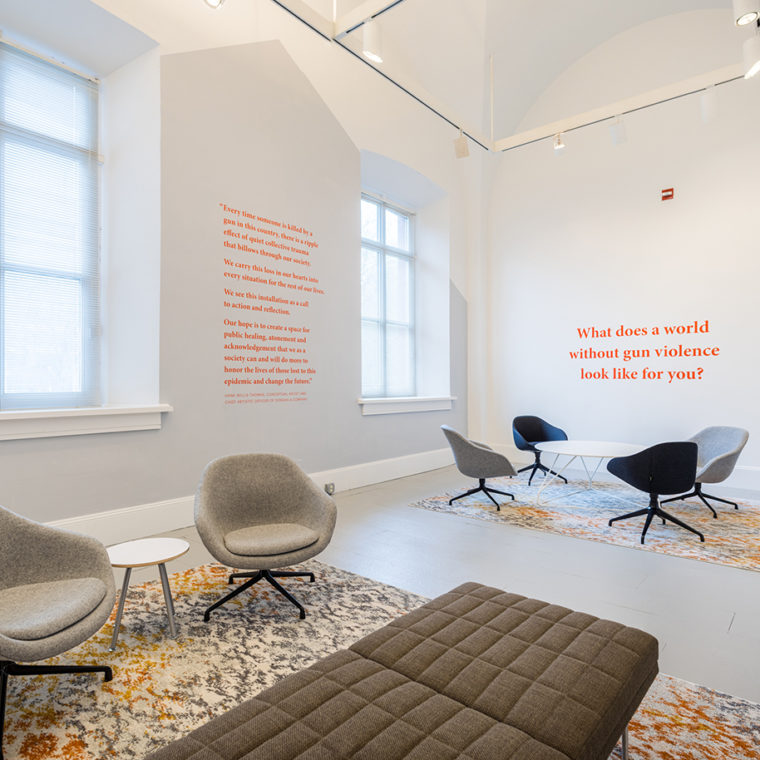 The installation concludes with a space for reflection and a call to action, offering visitors takeaway cards with information about local resources for survivors and allies. 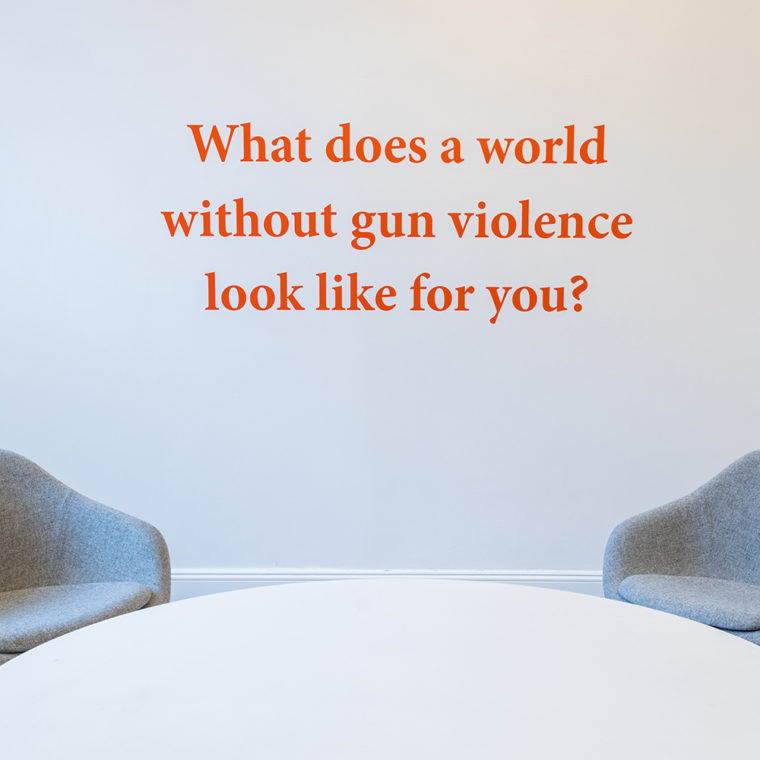 What does a world without gun violence look like for you?

The Gun Violence Memorial Project installation is made possible by: