Documenting Crossroads: Survival and Remembrance Under the Pandemic

2: Something to Eat: Neighbors Helping Neighbors

What follow are brief accounts of my observations of people giving and receiving free food in churches, restaurants, and schools and on sidewalks. The people distributing the food are friendly, polite, and hardworking, and they seem to enjoy the work. Most are younger than those waiting in line, but otherwise they don’t look different. Families, often accompanied by their children, often wait in the cold for hours at a time. The typical fare includes meat, vegetables, eggs, milk, and canned goods—or, according to Walter, a Queens organizer, “whatever we can get.”

The elderly wait in shorter lines, while the disabled go right to the front of the queue. Shut-ins can have their food delivered to their doorsteps by volunteers, by Catholic Charities, or by paid delivery services. Another alternative is for shut-ins to send a home attendant to get the food for them. Boxes are sealed, and people cannot discard or trade unwanted items. In Newark, when I saw large boxes of choice breads being distributed, several people asked for smaller amounts, but were told that they had to take the entire box. They left empty-handed, possibly because they could not carry such a large package.

On August 17, I spoke with Pastor Claudio of the Adventist Church in Corona, Queens. He was worried as he awaited the arrival of a truck with free food for the hundreds of people lined up along the sidewalk by his church. He told me, “Many of them are immigrants, not eligible for government programs. Families have been waiting for five hours. My big worry is that there might not be enough food.”

People in line tell me that they believe that the boxes come from the city because often the truck that brings the boxes has “City Harvest” written in large letters on its side; City Harvest is actually a large private charity. Food often comes from supermarkets and bakeries as it is about to expire, sometimes including luxury foods. Turkeys for Thanksgiving from the U.S. Department of Agriculture are in short supply and quick to go. I have seen people arriving at the food pantries, schools, and street sites when most of the food is gone, picking over rejected cabbages and tomatoes.

On the wall of the Willoughby Cornerstore in Brooklyn, I saw a green “community fridge” being stocked by a young couple in July. When I returned, a week later, a homeless woman was getting greens there. But by mid-August, the small pantry had disappeared; the building owner had asked them to leave. On August 24, at Little Skips East on Covert Street in Brooklyn, I photographed the Bushwick Fridge. Inside it were only three small cartons of milk, one apple, a rancid sandwich, and a large bag of tiny carrots. A note on a bulletin board requested “gloves, erase markers, and food!” Searching online for the Bushwick Fridge, I saw it fully stocked with milk, eggs, potatoes, radishes, and other items. Upon my return on November 4, the fridge was now well stocked with canned beans, soups, and greens; a sign on its door read “free food” and, in small letters below, “comida gratis.”

On September 9, across from Maria Hernandez Park, in Bushwick, Brooklyn, I saw two white women and a Latino man distributing bags of foods from the trunk of small SUV with Georgia plates. The blocklong line was mostly Hispanic and well-dressed, including a man wearing a tie. I counted half a dozen bags, not nearly enough for the line of people waiting. A man told the crowd in Spanish, “They feed me there, they feed me there, they feed me there,” as he pointed at the location of the places nearby where he gets free food.

On Martin Luther King Boulevard in Newark, on September 19, I was surprised to see large boxes of gourmet bread from La Brea Bakery and Cuisine de France being given away for free. The boxes covered the sidewalk in front of St. James Social Services, causing drivers to stop and look. Those who wanted bread were not allowed to open the boxes of croissants, cranberry, sesame, and sourdough breads, but they could look over samples that a woman was showing. A woman named Barbara was there, sitting in her motorized wheelchair. Her great-grandson was sitting on one of the boxes she had loaded onto her vehicle. Two small chickens belonging to a neighbor were walking on the grass nearby.

On October 13 in Harlem, I saw a man at a bus stop telling others who were waiting for the bus: “They have fruits and vegetables at Red Rooster, you can get as many boxes as you want.” The Red Rooster is an expensive, famous, landmark restaurant. Opening a box, he told them: “A sweet potato like this costs $3, and the food in a box like this costs between $37 and $40.” I asked a person distributing the food in front of the restaurant about this, and he replied that for the first seven months of the pandemic they had been giving away prepared food in paper bags. Just then a fire truck stopped by, and the firemen got out, picked up three boxes, and put them inside the truck. When I asked why firefighters with a job and a salary were getting free food, the person in charge told me: “It is not about money, it is about the community.” Joe, a retired sanitation worker, was taking three boxes to sick and disabled neighbors in his building who, he told me, were unable to come themselves. “They can’t come. I bring it to them,” he said.

On October 21, hundreds of Hispanics, Blacks, and Asians were waiting for a box of free food in the parking lot of the Seth Low Houses in Brownsville, Brooklyn. A woman named Sonia told me that the boxes, which are given away every Wednesday at 4:00 pm, each contain rice, beans, pork chops, chicken, milk, coffee, and sugar.

On November 17 at the International Pentecostal Church on West 179th Street in Manhattan, I saw a food line extending around the block. People were waiting with their carts to get a box filled with potatoes, apples, milk, eggs, two chorizo sausages, and onions. I saw a woman named Ana at the end of the line giving people salami and lemons, while urging those waiting in line to keep their distance, yelling, “The virus kills.” She told me that she was afraid of the coming rain. She instructed the people waiting, “The line cannot stop, it has to move forward.” At the end of the queue, a woman working for Ideal Home Health was distributing advertisements for jobs caring for the elderly and the disabled, as one job of home healthcare workers is waiting in line for food for the shut-ins in their care.

This exhibition has four parts, each with its own dedicated page and image gallery. All pages link to every other exhibition page. The final section also includes “Overheard and Observed,” in which Vergara documents a portion of what he has experienced over the past several months.

Documenting Crossroads: Survival and Remembrance Under the Pandemic: Something to Eat

Click directly on an image to display the caption. 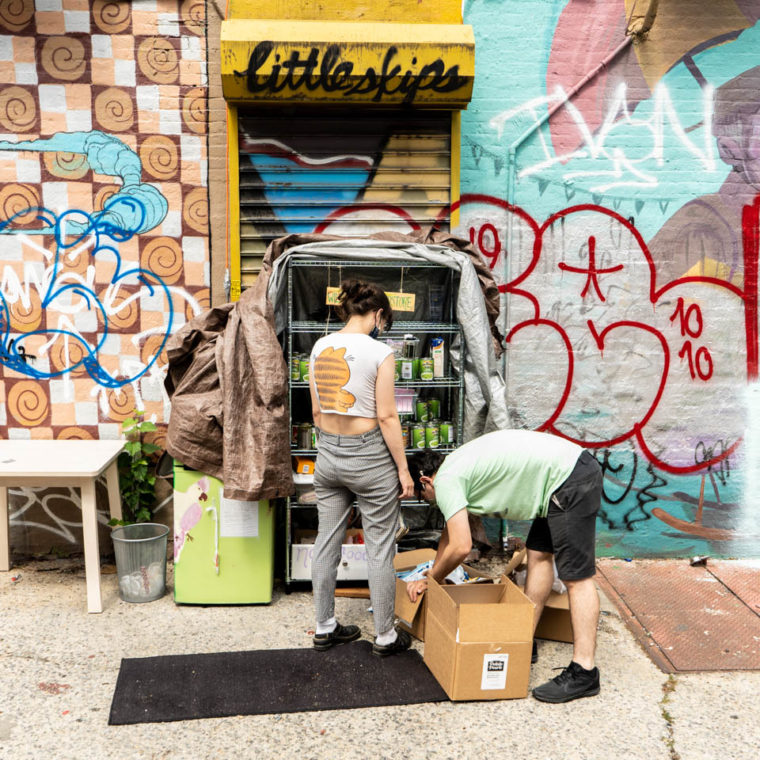 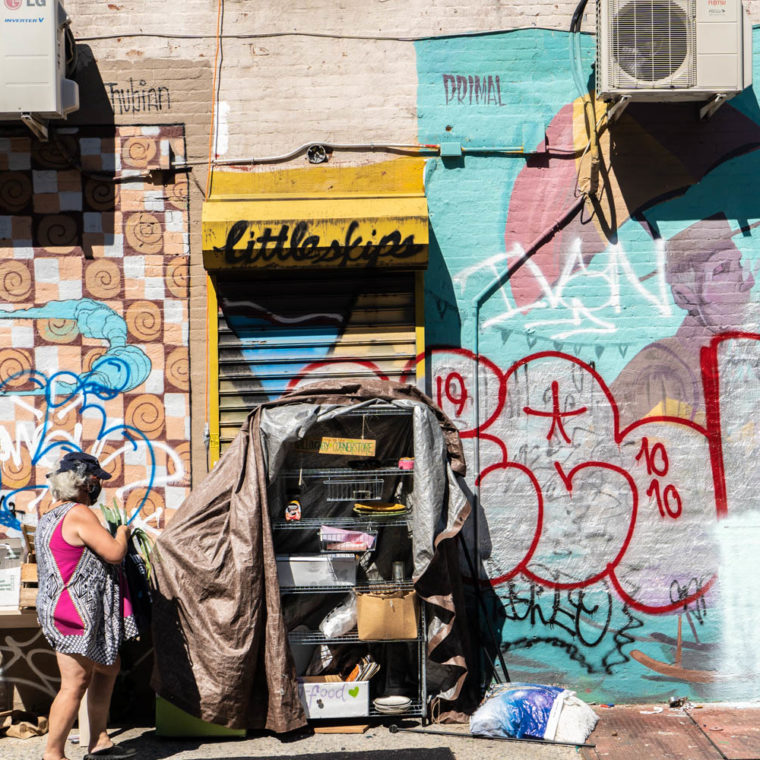 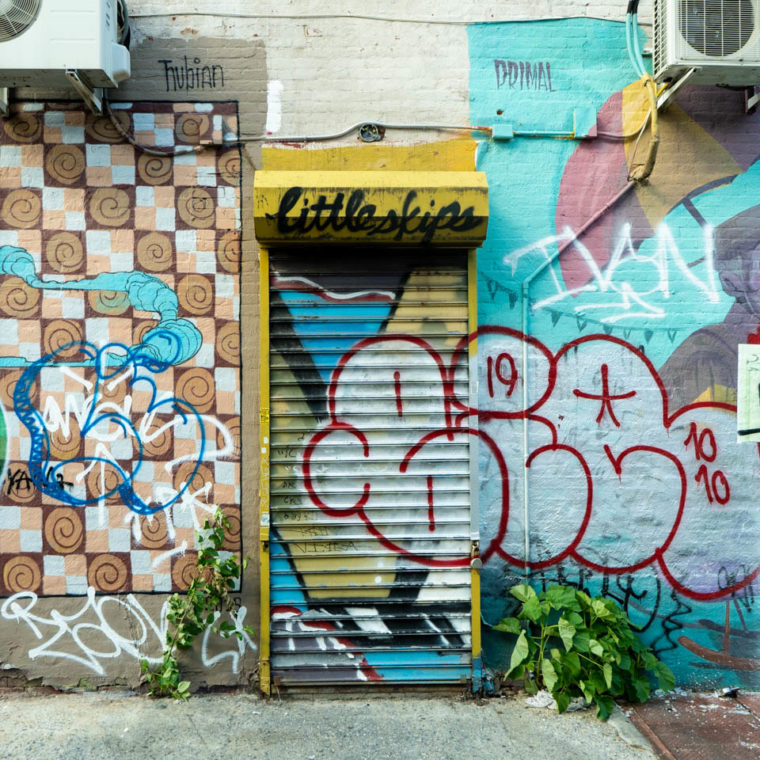 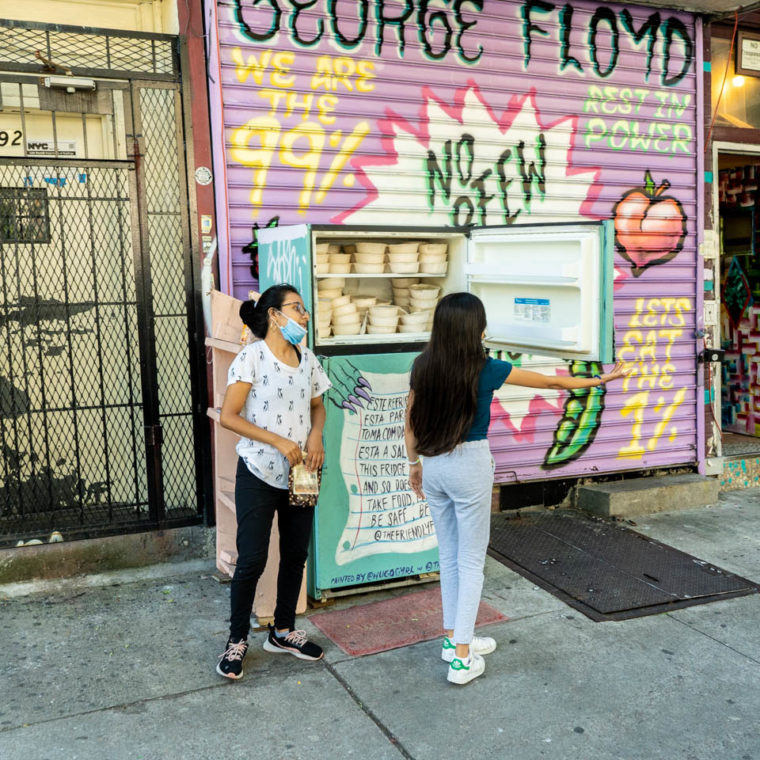 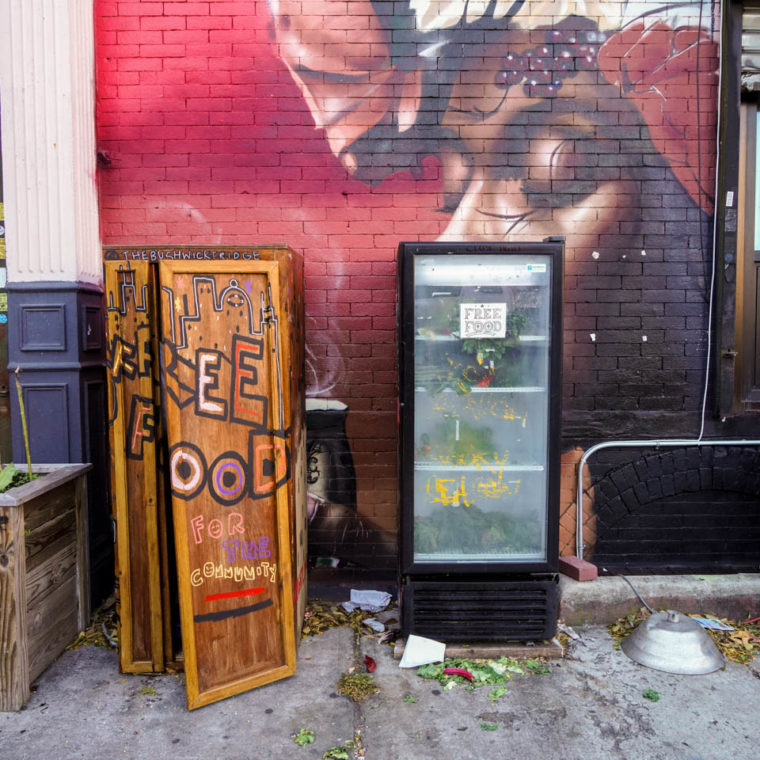 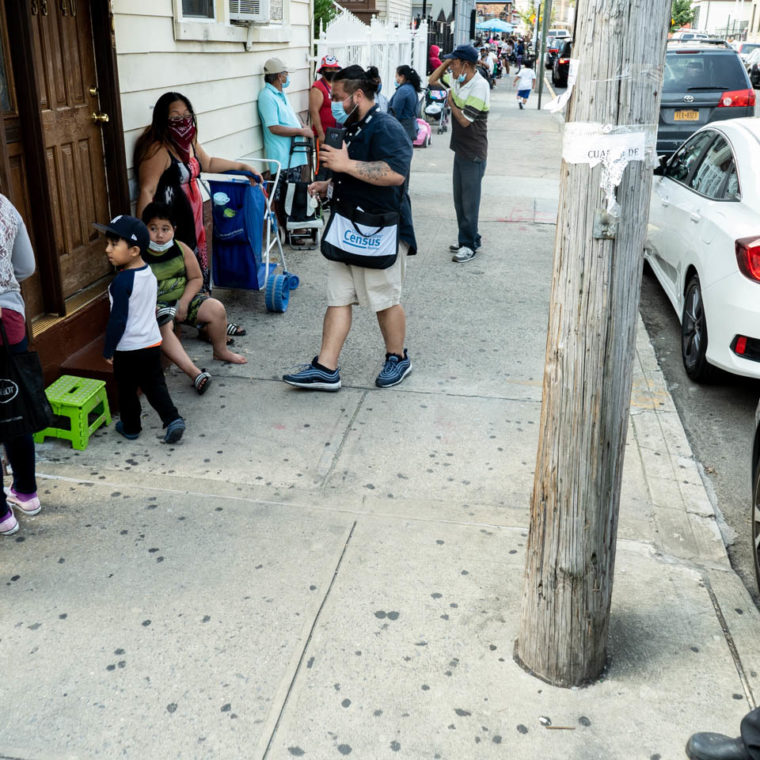 August 17, 2020: Families lining up to get free food, while a U.S. Census worker talks to a woman, her children by her side. Corona Seventh Day Adventist Church, 3530 103rd Street, Queens, New York. © Camilo José Vergara 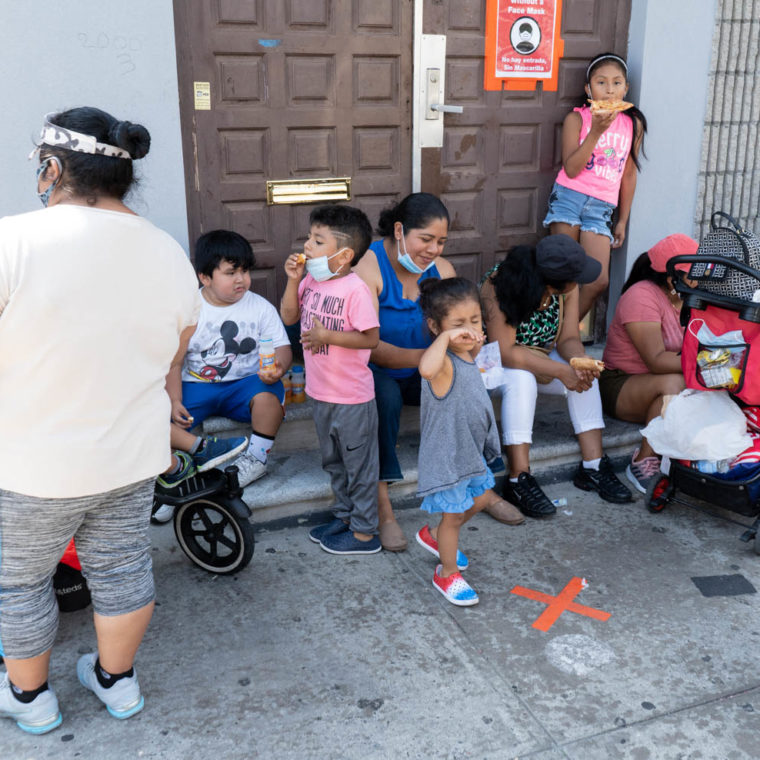 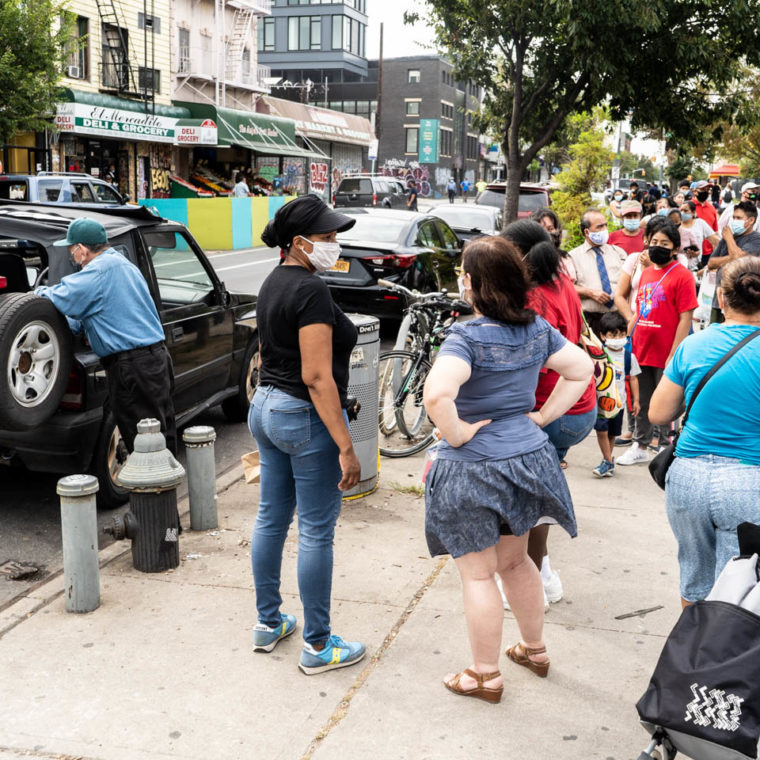 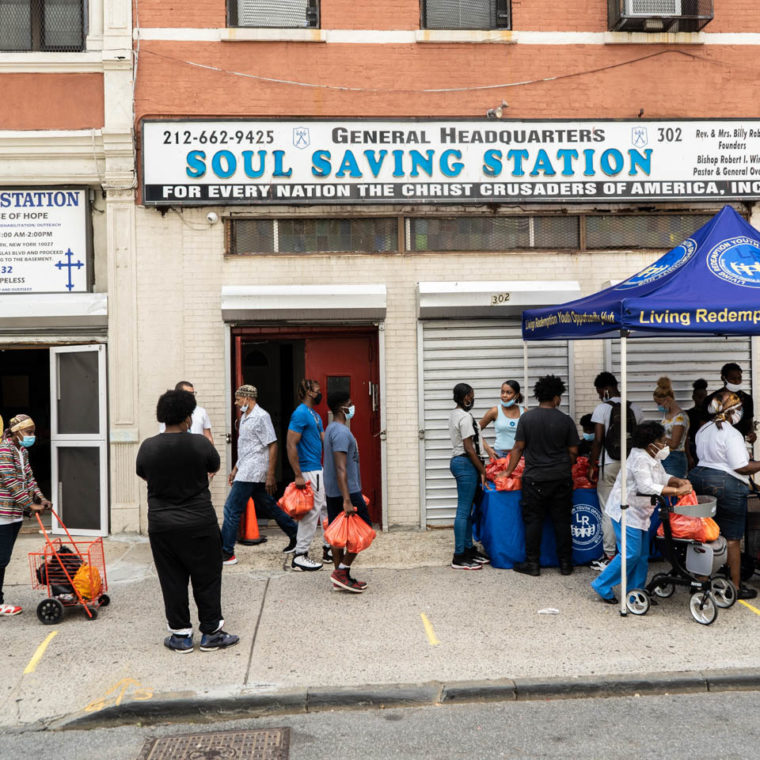 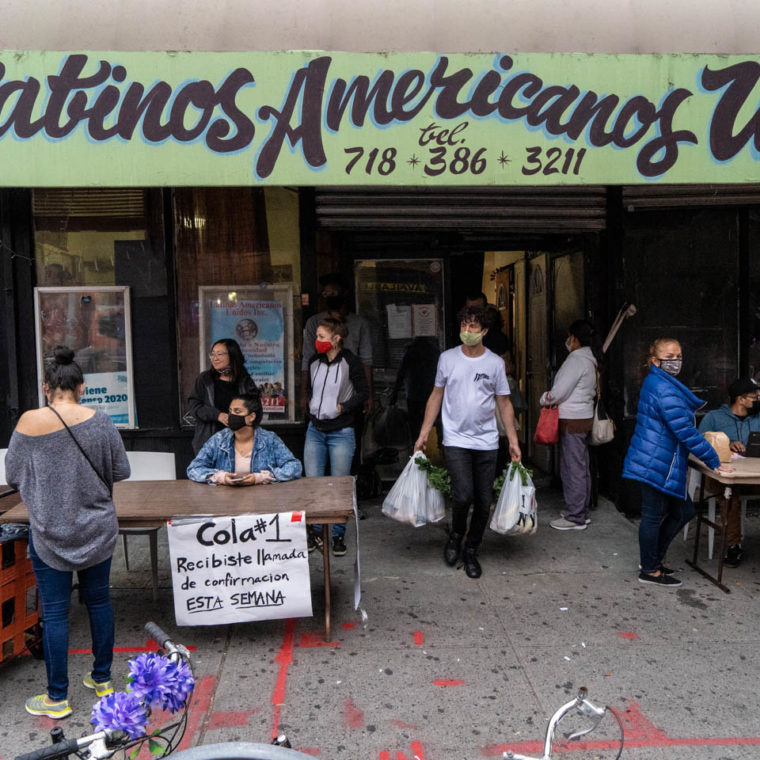 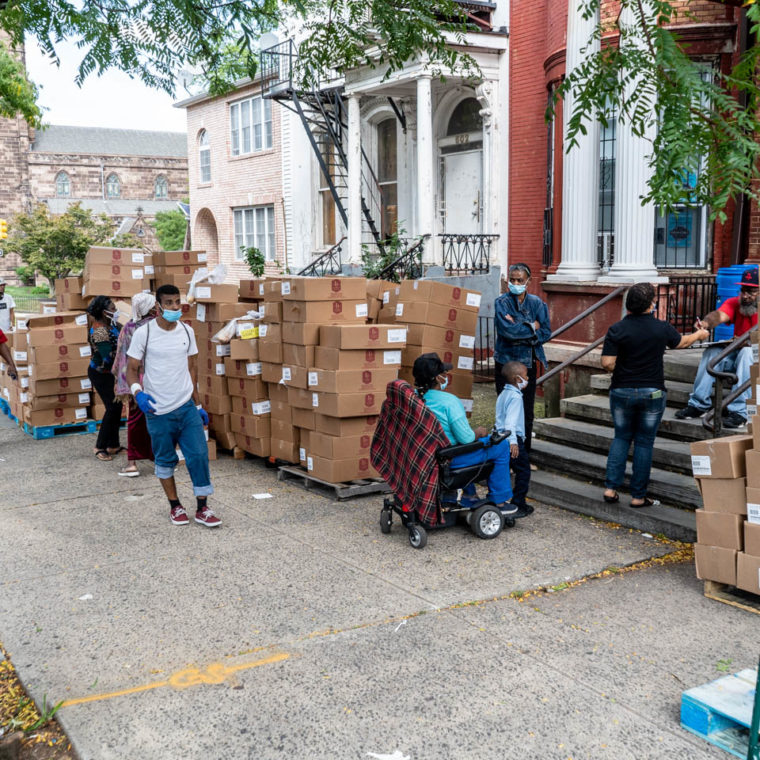 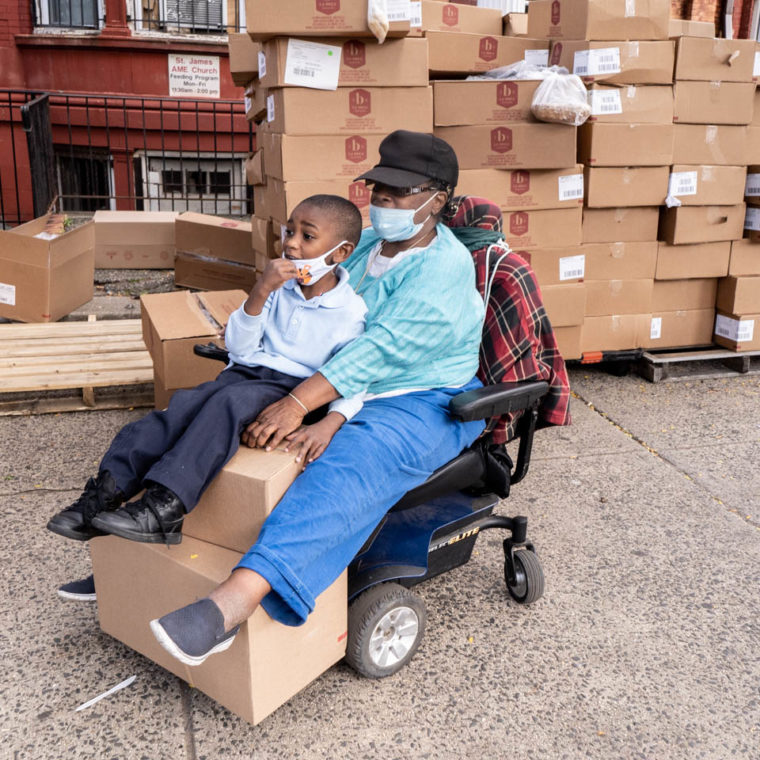 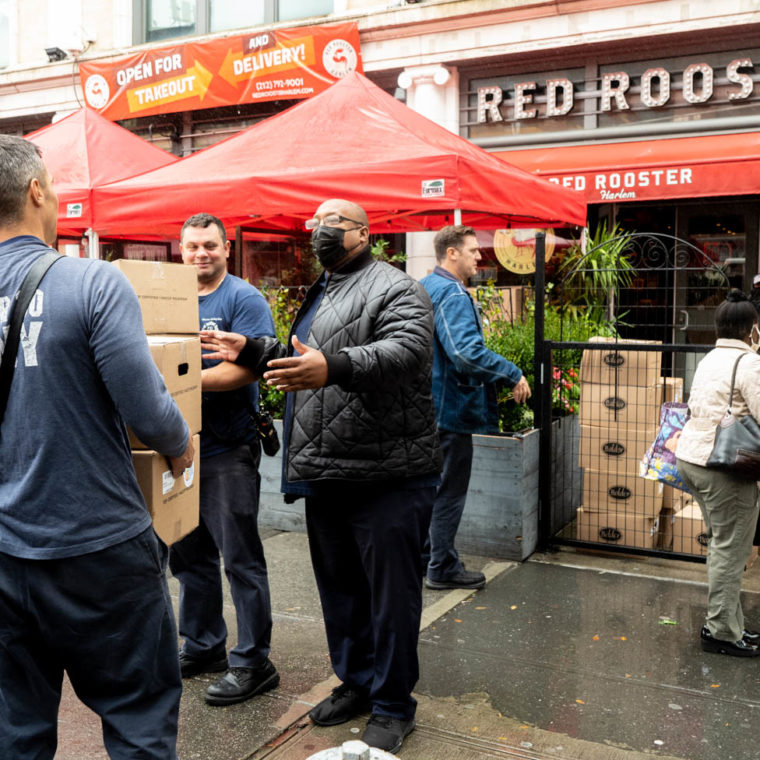 October 13, 2020: Boxes of produce being given to firemen. “We give to the community,” explained the masked man in black. Red Rooster Restaurant, 310 Malcolm X Boulevard, Harlem, New York, New York. © Camilo José Vergara 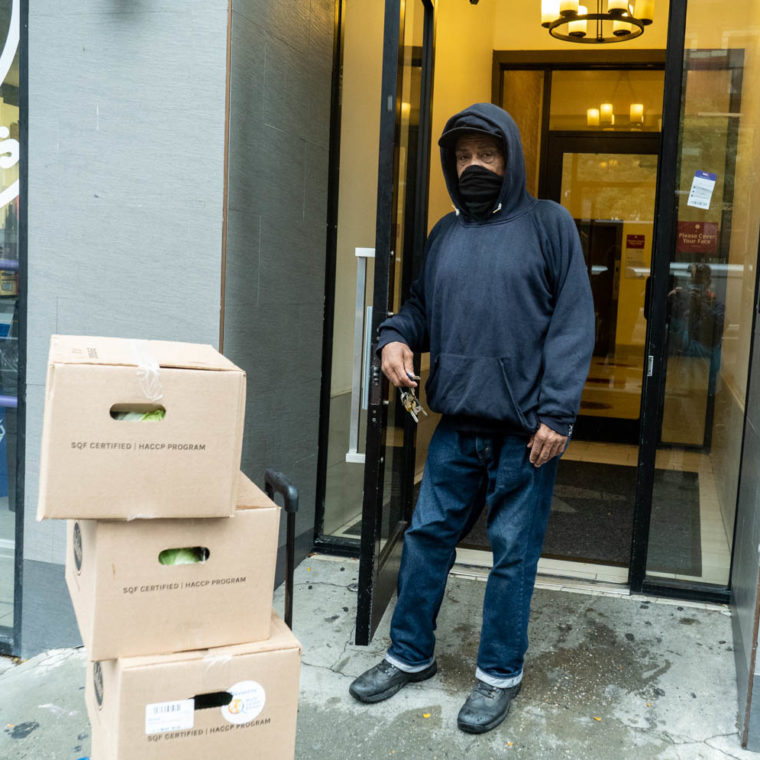 October 13, 2020: Joe, a retired sanitation worker, carrying boxes of free produce from Red Rooster Restaurant. He brought the boxes for elderly and sick residents of his building who were unable to get it themselves. 17 West 125th Street, Harlem, New York, New York. © Camilo José Vergara 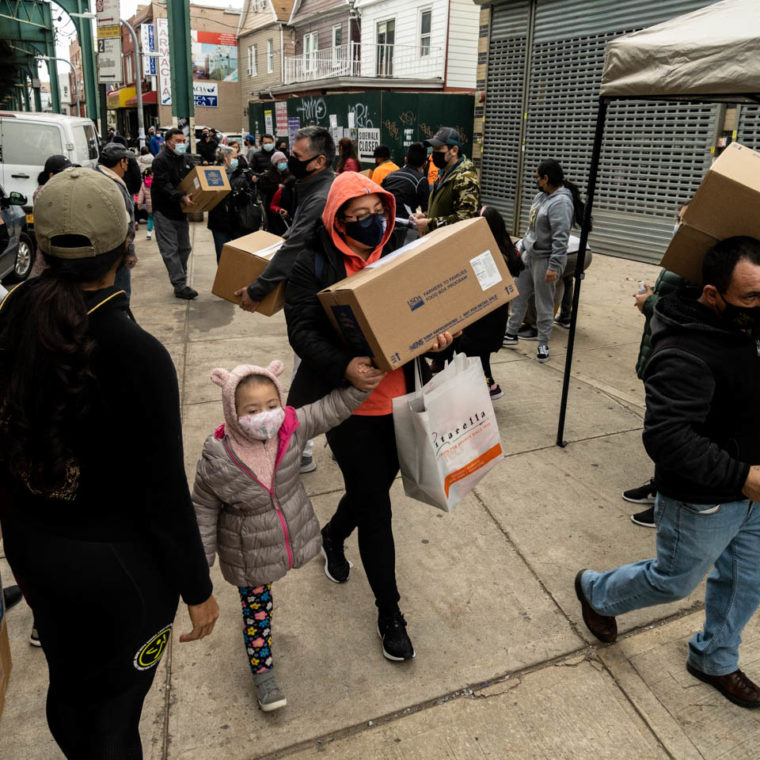 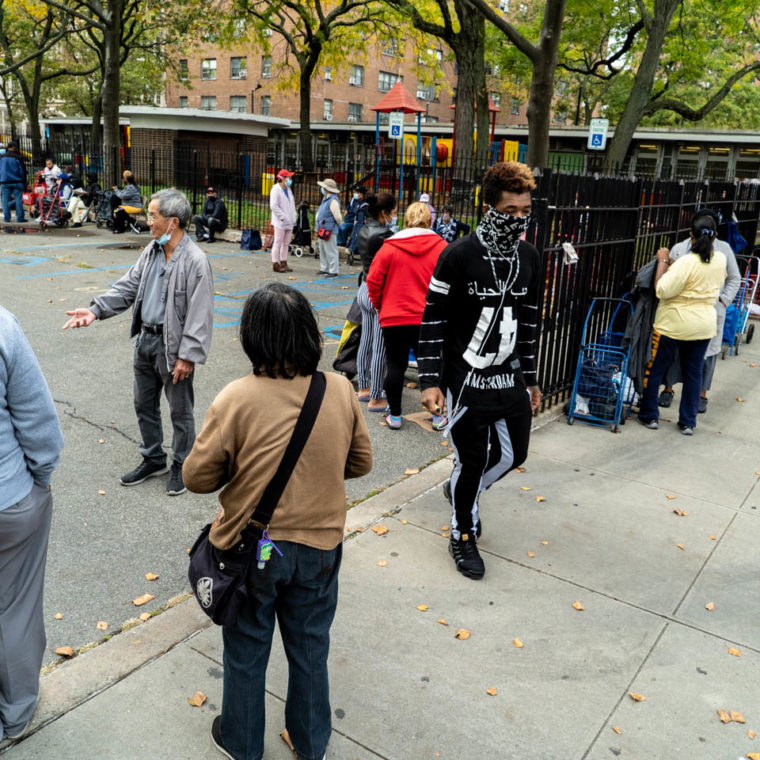 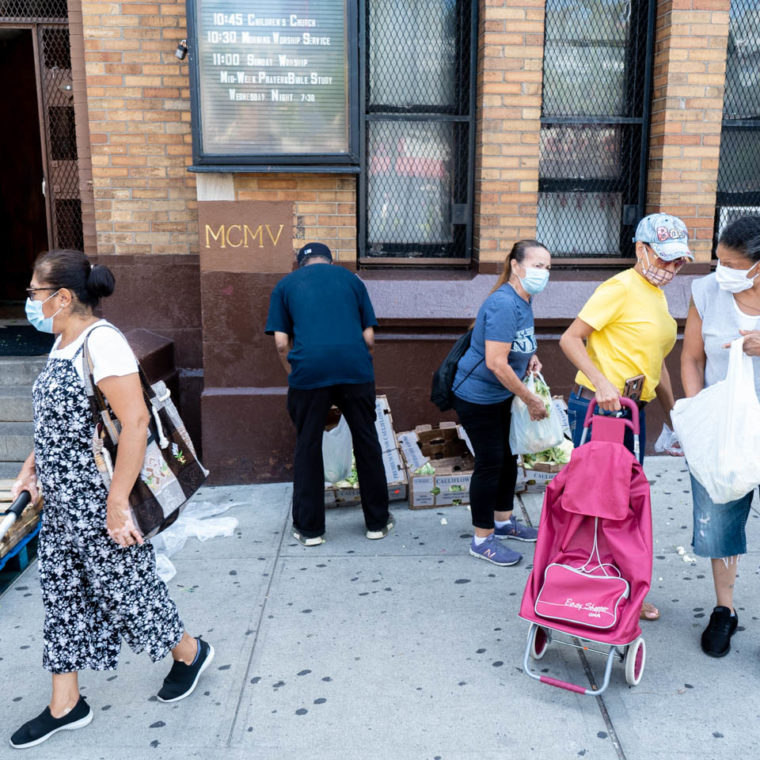 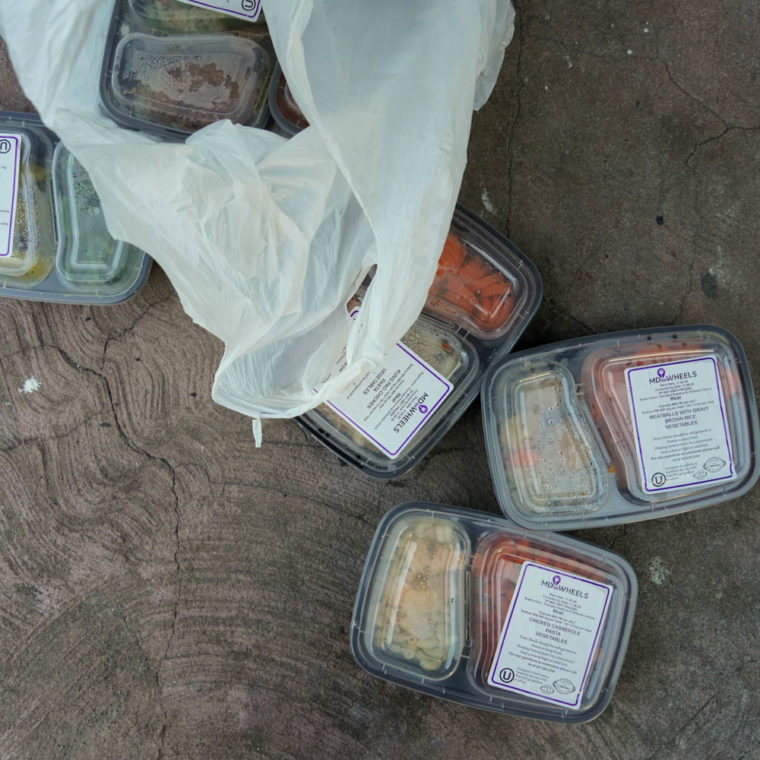 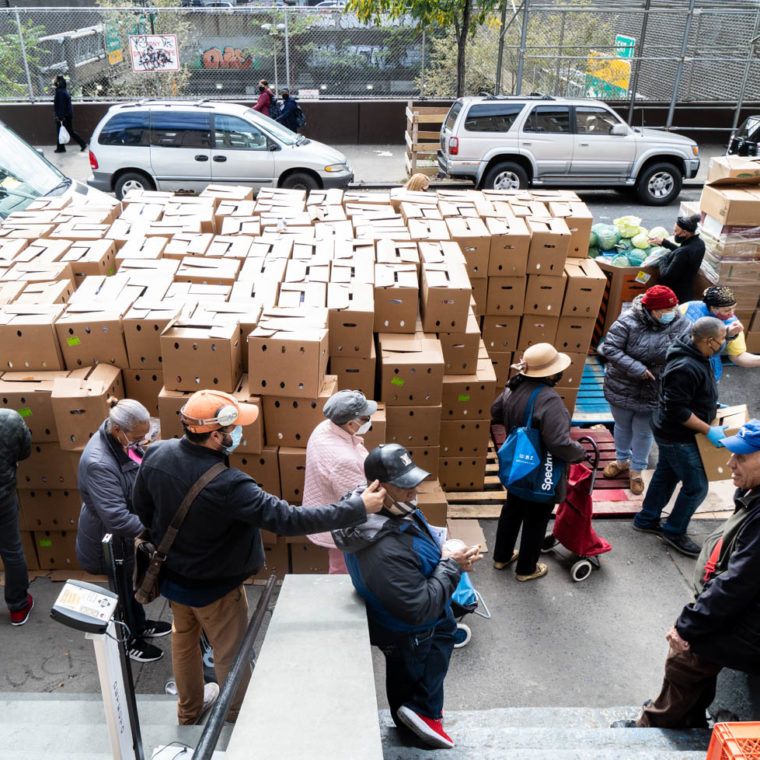 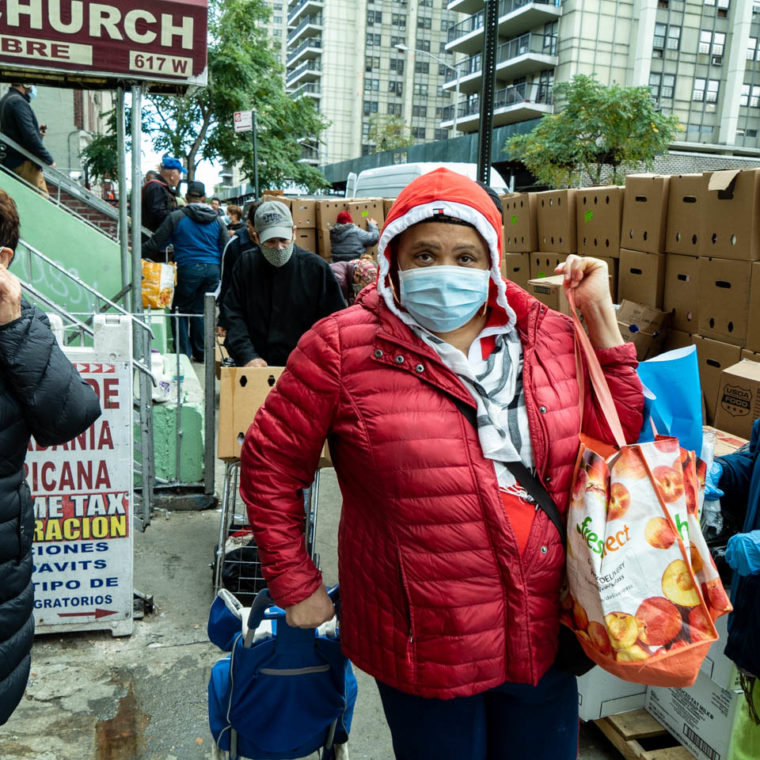 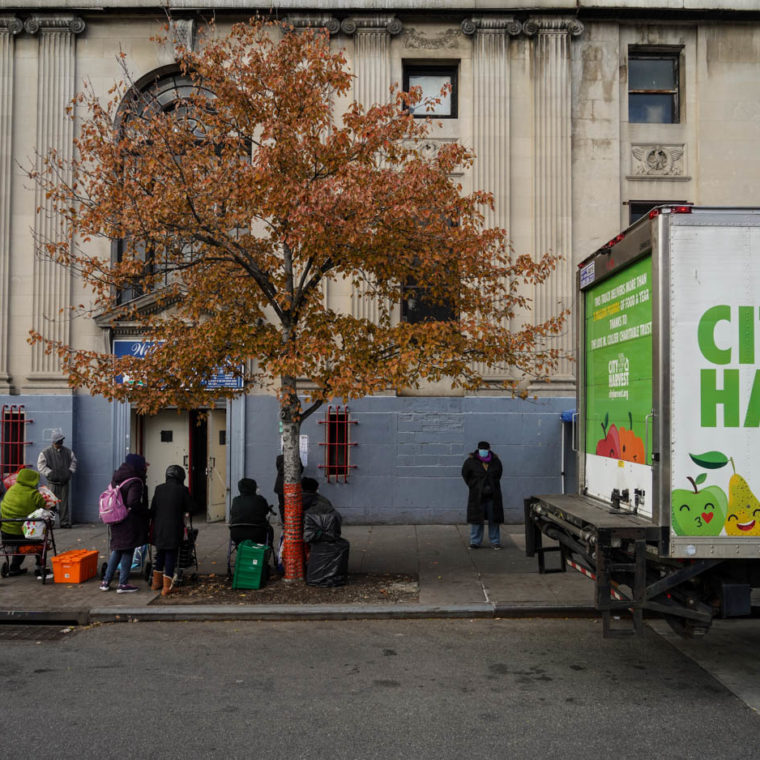 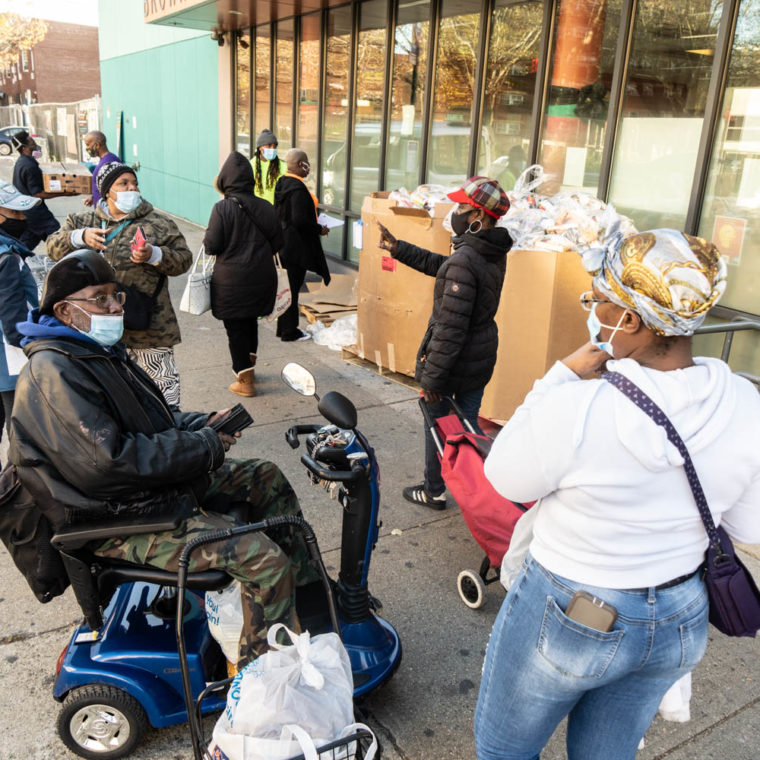 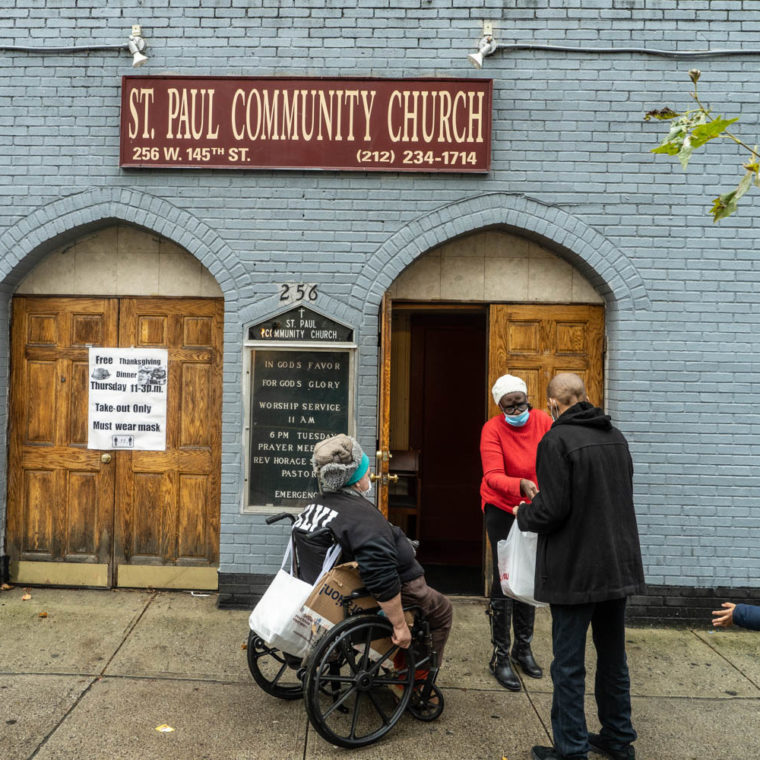 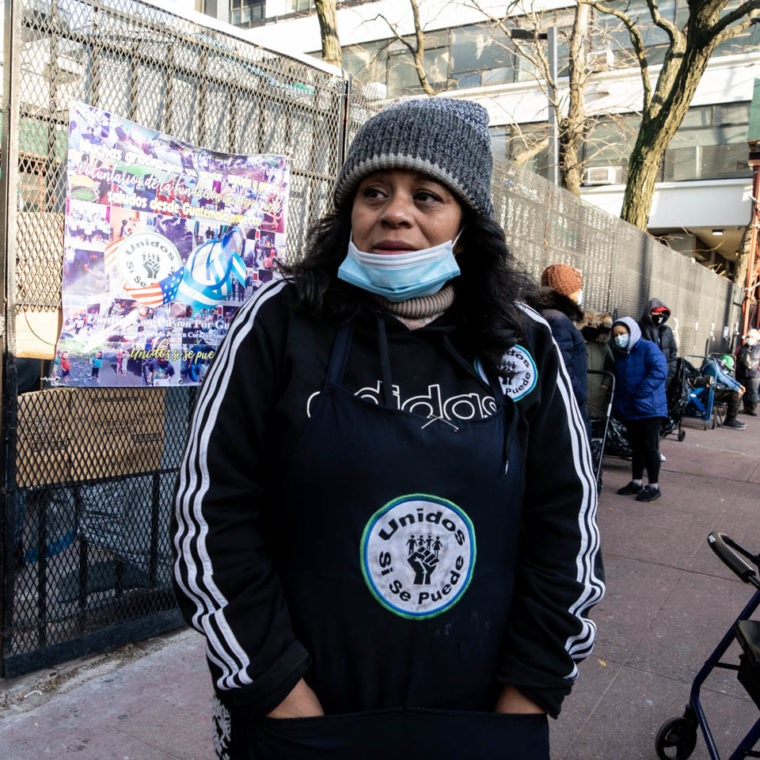 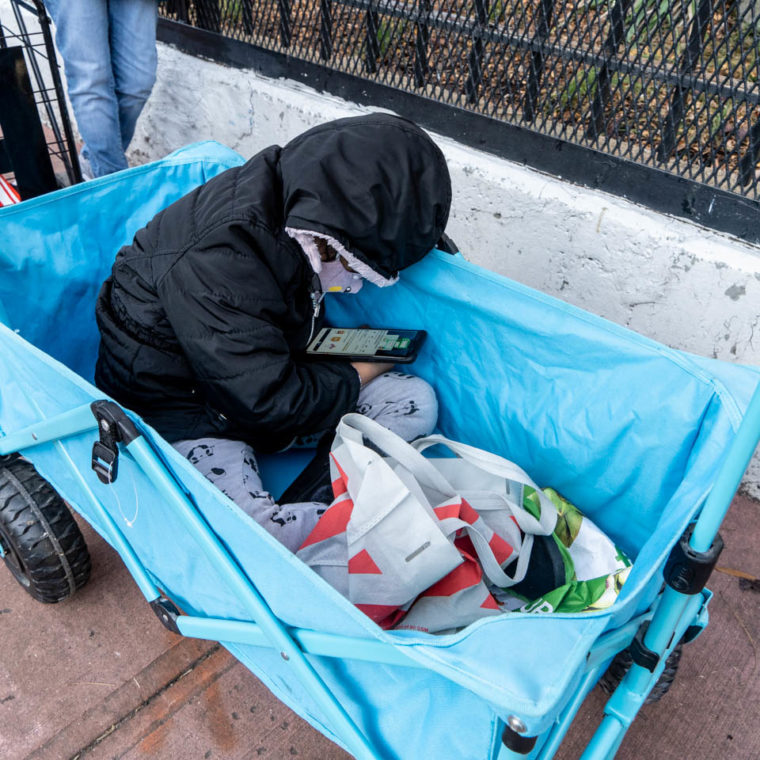 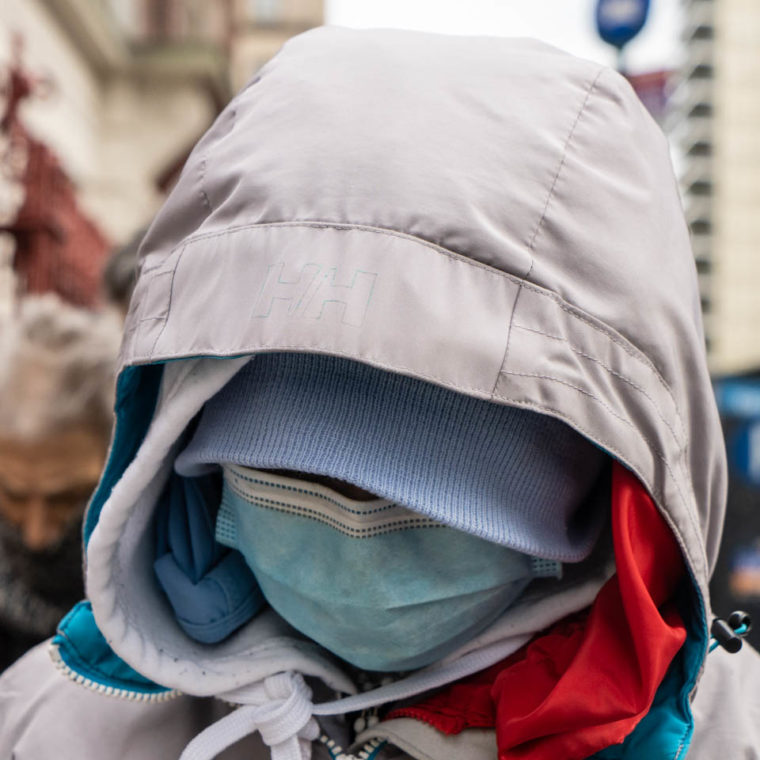 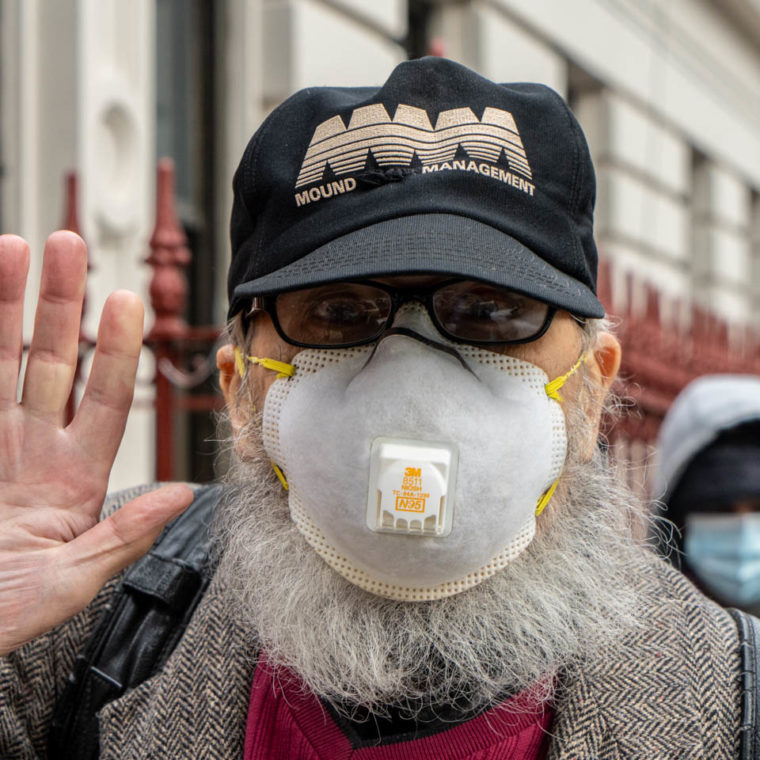