Between 1933 and 1940 tens of millions of Americans visited world’s fairs in cities across the nation. Designing Tomorrow explores the modernist spectacles of architecture and design they witnessed—visions of a brighter future during the worst economic crisis the U.S. had known. The fairs popularized modern design for the American public and promoted the idea of science and consumerism as salvation from the Great Depression.

Participating architects, eager for new projects at a time when few new buildings were being financed, populated the fairgrounds with an eclectic modern architecture. Pavilions housed innovative and dynamic exhibitions that paid tribute to factory production, technology, and speed. Exhibits forecasted the houses and cities of tomorrow and presented streamlined trains, modern furnishings, television, and talking robots. 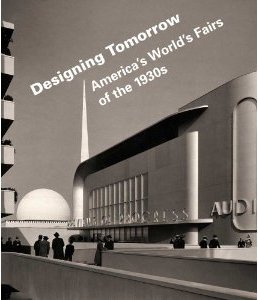 Designing Tomorrow traveled to two other institutions for display:

This exhibition was made possible in part by a major grant from the National Endowment for the Humanities: Because democracy demands wisdom. Additional funding was provided by the National Endowment for the Arts