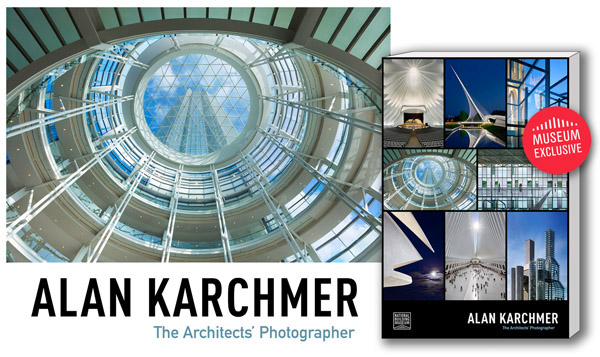 Watch a 12-part online gallery talk by Alan Karchmer, in which he discusses different aspects of photography—planning and luck, the defining image, capturing spirit of place, and more—using images from this exhibition. Hosted by Architectural Record.

Any prominent work of architecture is likely to be seen more widely through photographs than in person. These images have a profound influence on how a given building is perceived. A professional architectural photographer plays an important role in interpreting the designer’s work, making critical decisions about which aspects of the building to emphasize and which to suppress—or even exclude.

When widely disseminated, professional photographs help to shape public impressions of the building’s architectural character. An extraordinary image of an iconic building may assume iconic status in its own right.

Photographer Alan Karchmer has risen to prominence in his field thanks to his skill in conveying architects’ ideas and intentions. Having earned a Master of Architecture himself, Karchmer uses his knowledge of the design process, coupled with his own artistic vision, to express the essence of a building. He is, quintessentially, “The Architects’ Photographer.”

This exhibition presents a cross-section of Karchmer’s professional photographs, coupled with personal photos and artifacts that shed light on his work. While the exhibition will feature numerous large-format images of remarkable beauty, it will also include didactic displays examining the technical and creative processes underlying such images. It will thus illuminate why certain images are so successful in expressing both the physical and emotional aspects of architecture.

By displaying multiple images of specific buildings, the exhibition will also examine how a series of photographs can be used to create a visual narrative conveying a cohesive sense of design, place, and experience. The exhibition will shed light on the important but sometimes elusive role of artistic interpretation, tracing how the photographer’s own vision complements that of the architect, yielding final images that ultimately reflect a blend of the two. It will also explore how changing technologies—especially the transition from analog to digital cameras—have influenced architectural photography.

The exhibition celebrates Karchmer’s recent bequest of his professional archive to the collection of the National Building Museum.