The Museum sat down with members from dog & pony dc, one of our Creatives-in-Residence, to talk about this summer’s interactive experience, DISCOVERED! The Amazing Untold Stories of Catenarians, created exclusively for Hive.

DISCOVERED! begins with explorers running out of Hive after discovering a portal to Catenaria, ready to share the origin of this world and then invent the culture of the Catenarians through audience improvisation. In this interview Ivania Stack, Ringleader and Audience Integration, and Tosin Olufolabi, DISCOVERED! performer and regular dog & pony dc actor and designer, expand on their creation, their partnership with the Museum, and their involvement with the Deaf community. 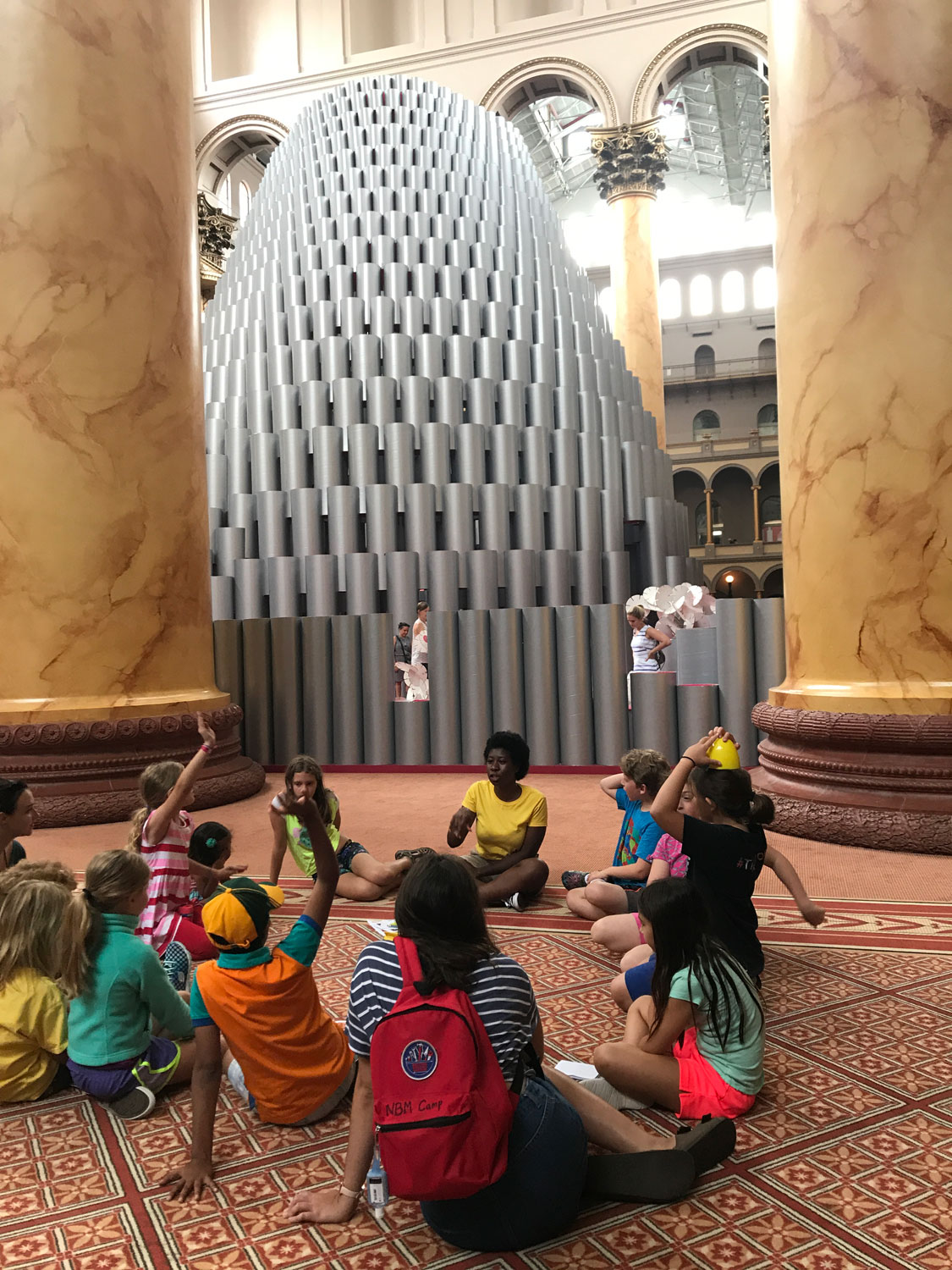 NBM Online: How would you describe dog & pony dc to someone who has never heard of you? What sets you apart?

Ivania: I would say a key component of our work is that it is ensemble devised and highly immersive. It’s less about “we’re presenting something to you” and more about “come do this thing with us, come go on this adventure with us.” In that way we combine facilitation skills with performance skills to get groups to talk to each other, invent something.

Ivania: That being said, we create something together within a fictional environment or in an imagined world often, because sometimes people feel freer to play or create.

Tosin: Lots of play! I love that word!

NBM Online: How did you create DISCOVERED! The Amazing Untold Stories of Catenarians? Was there a specific focus for its creation?

Ivania: We talked to everybody at the Museum and they told us about Hive and because we did ICEBERGS last year, which was really fun, we realized that one component we were missing was how we incorporate the built environment, the architectural idea of the exhibition into a story and into our play. How do we play with it?

Tosin: I think it goes back to creating an imaginary world or place for people to play, so we took the shape and the building and based this imaginary world off of that building as much as we could so that it always came back to Hive.

Tosin: It’s fun to pull these terms and turn it into more everyday things and also create these stories that are more fun, but it all goes back to the structure. There’s a part where I have a story about this dome and it is in the shape of a catenary arch and they’re scared it will collapse because there’s nothing holding it up– there’s a story around it that makes it more fun to play with, but you’re still getting the lesson and concept of the arch.

Ivania: It’s so quick how you draw that metaphor– “we think we need these supports, but because we’re all doing the work together” and we can stretch these metaphors and build on it. 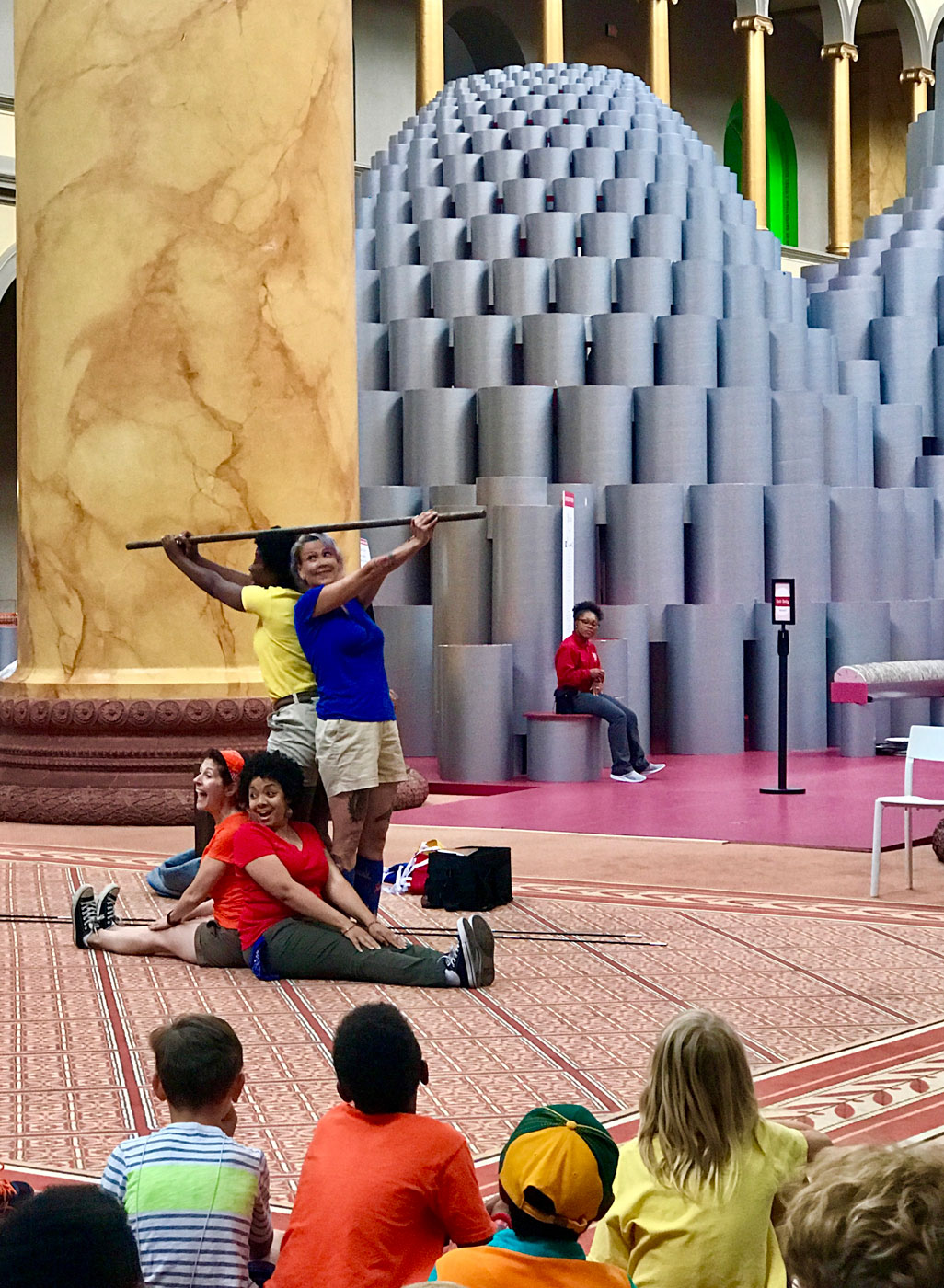 NBM Online: What did you enjoy about devising this performance?

Ivania: I really enjoyed the early conversations and the idea of creating an origin story or a creation myth and then looking up creation myths and their rhythm and how these stories are told. Then passing that ball to the devisers, and having them take that and say “How do we activate this?” has been really fun.

Tosin: The origin story is really beautiful and sentimental and it just makes you feel a lot. The excitement we get to portray… it really gets us hyped up and it’s really fun. It’s great to see that translated into the group activities and to keep the momentum going, because when it does, it’s just so much fun hearing people shout out ideas and what they think. People get really into it! They start creating the world themselves. My group was about the government, but one kid said “What about currency?” and that’s amazing!

NBM Online: This isn’t your first time working with us, but what makes you the perfect partner for the Museum?

Ivania: Some time ago, I went to see the exhibit D.C. teens put together where they take pictures and write poems and curate their own exhibit [Investigating Where We Live]. I remember thinking that’s exactly the work that dog & pony does. Let’s not just tell you a story about yourself, but let’s make a story with you that is about us. Regardless of whether you’re young or old or what have you, that respect for the artistry or creativity or brainpower of people is important to us and I see that in the exhibits in the Museum, like a certain amount of asking questions and telling. It’s a more immersive Museum than a lot of places and I am excited walking around that environment. There’s a certain museum aspect to some of our work too and I think there is a cohesion there.

Tosin: The Museum does a good job of creating an environment for us to play in and we have so much freedom as well. With Hive and ICEBERGS, even doing something simple with those structures around us, helps so much in transporting people to these worlds that we’re creating. Even though they’re in a museum and might be in a museum mindset, to be able to walk around these structures is already going to open up their imagination, we just kind of take them there. It works well to have the base, the structure, the place, the environment and for us to build on that.

Ivania: Just the fact that the Museum does a summer exhibit is huge. It’s a community galvanizer and people love to come, interact, and there’s not a specific group or age. Anyone who is interested can come.

We certainly appreciate having this sound and visual environment. The biggest, baddest, set design ever! We love to work with immersive environments if we can, so it’s already there.

NBM Online: dog & pony dc has a strong connection with the Deaf community. Could you expand on the importance of this connection?

Ivania: We realized– not only because we knew people and it happened that way– part of creating an immersive, truly collaborative environment, is that we had a lot to learn about Deaf artists in our community. Things like “how do you conduct a meeting so that everyone has a chance to share and can see each other?” There’s a respect to that that goes hand in hand with everything dog & pony was trying to do with immersive productions and I think we have gained so much as a mixed hearing and Deaf theater company. This idea of audience integration has grown because of that, so it enriches everything.

Tosin: The values of dog & pony are really shown when you see people interacting with the Deaf community. It really is about making sure each person is seen and heard. People are actively making space for each other. That respect and consideration is much more active.

Ivania: I like to put a metaphor to it. Now I’m more aware that I’m blocking someone, their eye line. That is also a metaphor as we operate in our different communities. Who am I blocking and who can I bring here with me? Constantly checking behind you, seeing who have I taken this spot from, potentially? Who could be with me and make this a better conversation?

Tosin: It all stems into the work we do- opening up and inviting other people.

NBM Online: Is there anything else you’d like to let people know?

Tosin: Come to Hive and DISCOVERED!