An interesting and rare device was recently donated to the Museum’s permanent collection.  The Seismichrone was developed, manufactured and sold by local inventor and engineer, Charles A. Wall.  He designed the device for use by engineers and contractors who needed to know the depth to bedrock and hardness of subsurface materials.  To operate the Seismichrone, a technician would “pound the ground” using a specifically designed fiberglass hammer (unfortunately, none of the hammers were saved, otherwise we would have added them to our collection too!).  The pounding would propagate a seismic wave that went to a transmitter and then the data would be sent wirelessly to the Seismichrone, which would light up a series of dials.  The technician would translate the reading to provide a very accurate description of what types of rock lay beneath the surface of the ground.  A subterranean map of the area would then be provided to the client, usually a developer or prospective buyer.

According to his daughter, Kathleen Wall, the technology used in the Seismichrone was well-known, but Mr. Wall revolutionized the process by miniaturizing the device and adding in wireless communications provided by a radio link. “At the time,” explains Kathleen, “equivalent work could only be done by machinery so large that it needed to be transported by truck. The Seismichrone is the size of a lunchbox.”  This new technology was patented by Mr. Wall and only sold through his company, Wallco, Inc. 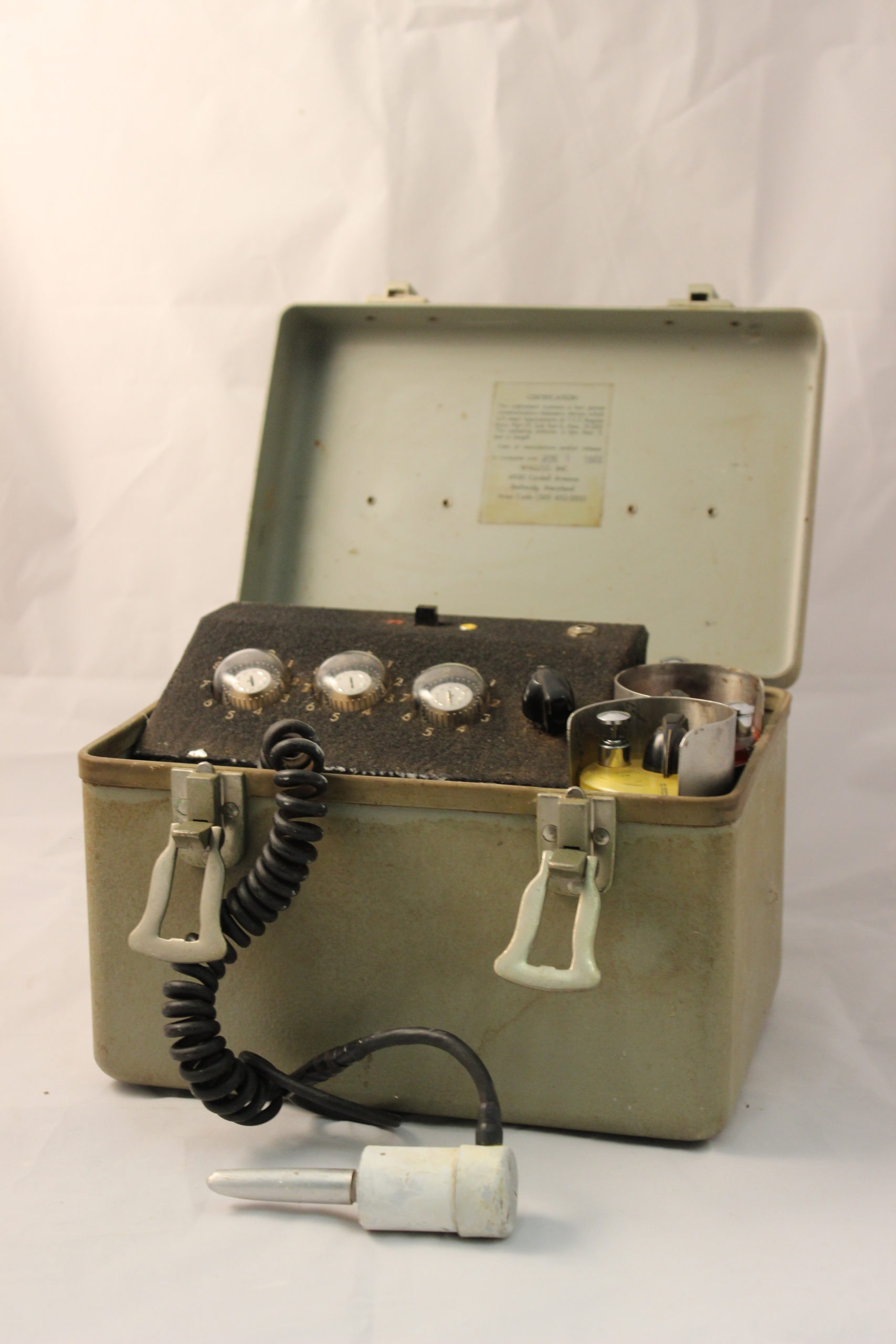 Mr. Wall’s home office was in Montgomery County, Maryland and he worked on residential and commercial job sites throughout the Washington, DC metro area in the 1960s and 70s.  His job sites were mostly in Reston, Pohick, Occaquan, Manassas, Herndon, Dale City and Lake Montclair, but he even traveled to Richmond, Virginia and Atlanta, Georgia for specific developers.  The Museum is thrilled to add revolutionary construction tool, developed by a local engineer and used in local projects, to our collections.

The Seismichrone was donated by Charles Wall’s daughters, Kathleen Wall and Teresa Wall Seeback.  Mr. Wall was born in Roanoke, VA After serving in the Air Force during WWII, he earned a degree in aeronautical engineering from Roanoke College and went on to work for Convair Aircraft Co. and eventually took a job with National Electronic Laboratories before starting his own business.  According to Kathleen, while the Seismichrone was originally designed to be manufactured and sold, Mr. Wall quickly realized he preferred working with the device rather than selling it.  He bought back many of his own devices and changed his business from a sales force to a consulting practice.  He and a small crew of men used the instrument to obtain the necessary data for construction companies.  Kathleen recalls that Mr. Wall “pounding the ground” in the park behind her childhood home in Bethesda was a common sight as she grew up and never failed to attract a crowd of curious onlookers.  Wallco, Inc. continued to operate after Mr. Wall’s death in 1973 but eventually, the workforce grew smaller and smaller until the entire company closed their doors for good in the mid-1980’s. Kathleen held on to the device for years but she and her sister recently decided to donate it to the Museum so their father’s story, work, and ingenuity could be shared with our visitors.