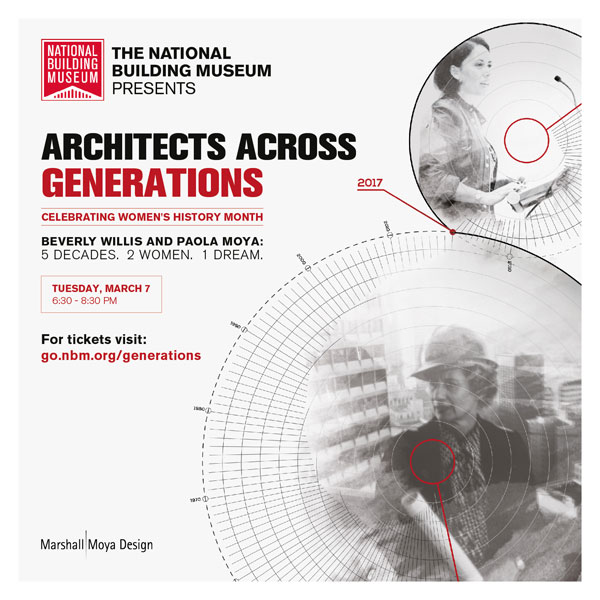 In a career that has spanned more than six decades, Beverly Willis, architect, artist and philanthropist, has played a major role in the development of many creative and professional concepts important to architecture and American cities. Among her notable projects are the San Francisco Ballet Building in the city’s civic center (1984); the Nob Hill Court Apartments (San Francisco, 1973); and Union Street Shops, a pioneering historic adaptive reuse development (San Francisco, 1964). She is also known for her numerous achievements in the creation of new technologies in architecture, urban planning and public policy, as well as her leadership initiatives on behalf of architects and designers around the world.

In 2002, after she had been in practice for 50 years, she founded the Beverly Willis Architecture Foundation (BWAF), a national research and educational non-profit. Initially, the goal of the BWAF was to document and highlight the historic work of female architects; it has expanded to take on a broader role of educating the public on a spectrum of issues. She said: “I discovered that the designs and work of professional women in the built environment, whether architects, engineers, or planners, were not in the history books. While thousands of women have practiced over the decades, some have been truly gifted and exceptional and, during their lifetimes, showered with professional awards, recognition, and press. But when they die, they fade into obscurity and their history is lost. To be lost because one was simply a woman? That needed to be changed.”

Paola Moya is the principal and CEO of DC-based Marshall Moya, whose firm has designed some of the city’s most iconic projects, including the historic Howard Theatre, Chuck Brown Memorial, Reunion Square in Southeast and the new Student Center at the University of the District of Columbia. The firm has just completed design of the National Market at MGM National Harbor, and is currently working on the DC United Stadium and Entertainment and Sports Arena, the new practice facility for the Washington Wizards and home court for the Washington Mystics, as well as projects in New Jersey and Massachusetts. With tenacious leadership and creative vision, Moya has led the firm’s successful growth into new architectural markets. Her creativity and passion for different areas of design has awarded the company not only architectural projects, but also graphic, product and public art design. For the last six years the firm’s growth and elevated profile has been a direct result of the strategic plan she designed and executed since taking the helm as CEO. “I am extremely humbled and honored to be included in this landmark event with a true pioneer, whose career and talent I have greatly admired. Beverly’s passion and achievement has inspired every facet of my work and life,” commented Moya.

At the talk on March 7, the two women will discuss how architecture and design has evolved in the past half-century, the pressing issues facing architects, architecture firms and design entrepreneurs today, and what lies ahead. They will also explore the “art” of working across disciplines, staying agile and flexible within an evolving professional landscape, and the importance of entrepreneurial instinct. Moderator Aileen Kwun is author of Twenty Over Eighty: Conversations on a Lifetime in Architecture and Design, which includes perspectives from Ms. Willis. A book signing follows the event.

ABOUT
BWAF works to change the culture of the building industry so that women’s work, in both contemporary practices and historical narratives, is acknowledged, respected and valued. BWAF achieves its mission by educating the public and transforming industry practice through collaborations with museums, professional organizations and other groups in the areas of architecture, design, landscape, engineering, technology, real estate and construction. BWAF creates archival digital marketing material including website archives, specialty websites, films, public events, and closed, invitation-only events to research and test innovative ideas and strategies. Learn more.

With a portfolio of high-profile projects, a team of artistic innovators, and a collective commitment to advancing communities, Marshall Moya Design has earned recognition and accolades on regional, national, and international levels. As a boutique architecture and design studio, we believe that brick and mortar should connect and inspire people, while supporting and improving communities. Marshall Moya Design projects span the commercial, institutional, civic, and cultural sectors. Firm team members have designed a number of iconic projects in the Washington, D.C. region, including The Howard Theatre; Chuck Brown Memorial; Reunion Square in Southeast; dynamic elementary schools; and the new Student Center at the University of the District of Columbia. Current projects include the D.C. United Stadium, the state-of-the-art Wizards Practice Facility, and projects for MGM Resorts International. Marshall Moya Design is known in the D.C. region as an influential and valuable design partner. Michael Marshall originally founded the firm in 1989 as Michael Marshall Architecture. In 2010, he formed a partnership with Paola Moya to establish Marshall Moya Design, with a commitment to uniting people and strengthening communities through innovative design. www.marshallmoya.com @MarshallMoya

Twenty Over Eighty features profiles and interviews with twenty creative professionals over the age of eighty who have dedicated their lives to design. In revealing conversations with creative minds from a broad variety of fields – architecture, advertising, furniture, product, industrial, and graphic design – Aileen Kwun spotlights makers and thinkers who continue to experiment, innovate, and make vital contributions to their disciplines well into their eighth decade. The book is not only a record of their remarkable histories and experiences, but also a source of knowledge and inspiration for contemporary creatives and generations of designers to come. (May 2016, $35, Princeton Architectural Press)

The National Building Museum is America’s leading cultural institution dedicated to advancing the quality of the built environment by educating people about its impact on their lives. Through its exhibitions, educational programs, online content, and publications, the Museum has become a vital forum for the exchange of ideas and information about the world we build for ourselves. Public inquiries: 202.272.2448 or visit www.nbm.org. Follow us on Twitter: @BuildingMuseum and Facebook: www.facebook.com/NationalBuildingMuseum.